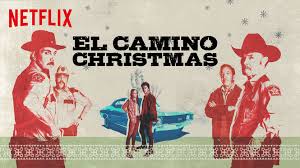 El Camino Christmas is the story of man trying to meet his dad for the first time, and instead things go sideways real fast. Luke Grimes (Eric Roth) meets a man claiming to know his dad (Tim Allen) that turns out to just be the local alcoholic. Sadly some weed falls out of his pocket in Grimes car and the small town police already not liking him drag him in and accuse him of running drugs. This is where things get even worse, see Carl Hooker (Vincent D’Onofrio) plays an old cop stuck in his ways and willing to do some unsavory things, like beat a prisoner until he confesses.

The next morning Deputy Billy (Dax Shepard) lets Grimes go to keep things a bit civil. No one gets to go to jail and the local cops don’t get in trouble for beating suspects. Seems fair right? This is where things get even worse. See Carl sees grimes, takes a few shots, forces him off the road and we end up at a local store.

The movie itself is good for a few laughs and there are some deep heart to heart moments in the store, but over all the movie is simply average. If you are a fan of Tim Allen you will really like it as his character is interesting and of course funny in that special Tim Allen way. Of course Kurtwood Smith is always a good time as well. The movie has its faults tho. The story itself it pretty bland and slow going and just about everything about it has been there done that, except the ending. The ending is amazing. So if you need a quick laugh and have some time to kill give it a shot, but don’t expect life altering. Best wishes and may the gaming gods bring you glory.