Strictly Limited Games is proud to announce the next partner store release: A Limited and a Collector’s Edition on Nintendo Switch and Sony Playstation 4 of Ys Origin. First released in Japan 2006, this action role-playing video game, developed and published by Nihon Falcom, has successfully been released on other platforms including PS Vita, Microsoft Xbox and PC.

Due to the popular demand, DotEmu and Clear River Games will be offering a very exclusive version of the Ys Origin Collector’s Edition in the Strictly Limited Games Partner Store, costing a very affordable €44.99. These beautiful editions will be limited to 3000 units on Switch; respectively 1500 units on PlayStation 4.

The Collector’s Edition will include: 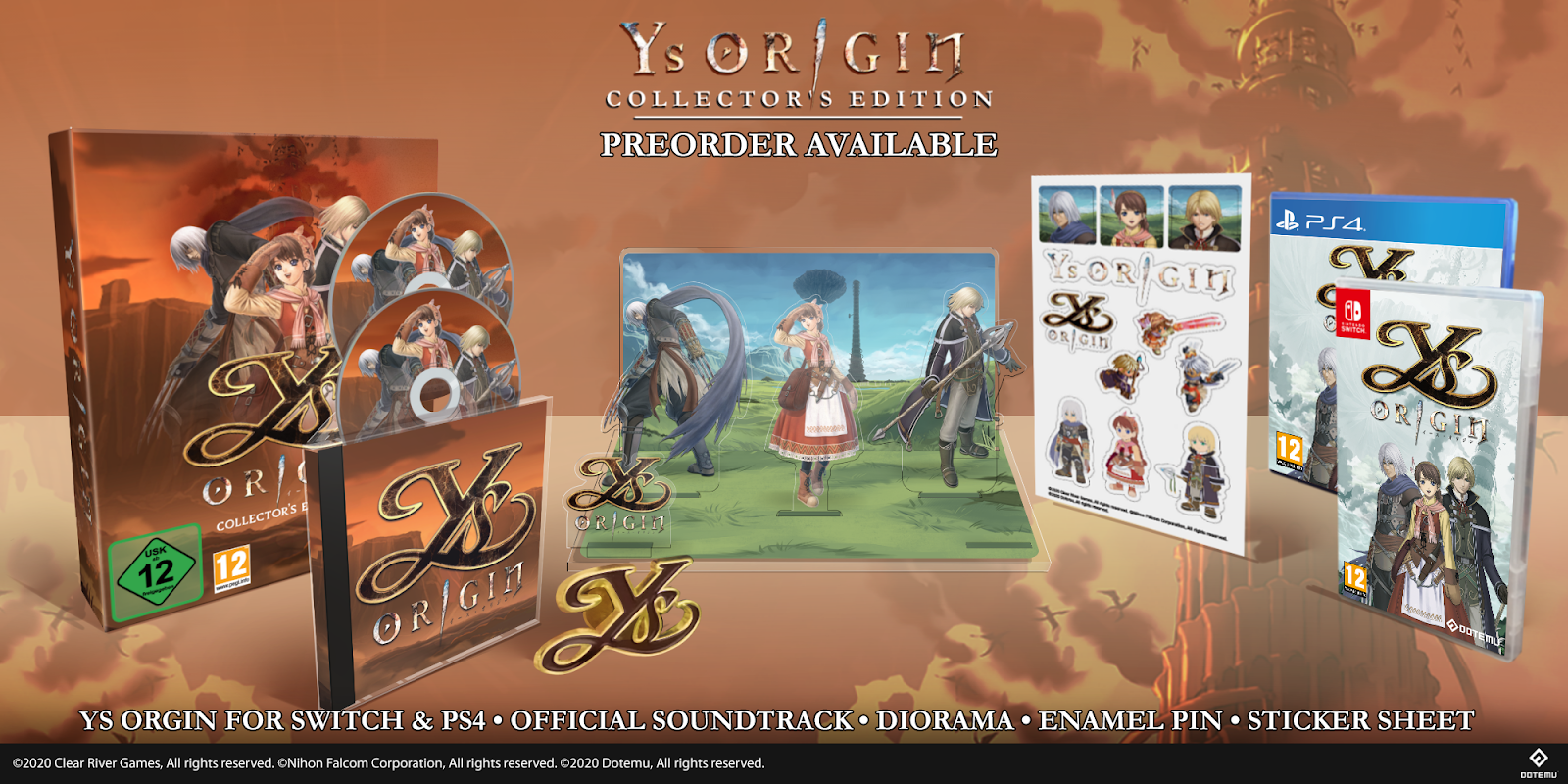 Besides the CE, there is also a Limited Edition of the stand-alone game with an exclusive reversible cover and individual numbering for €29.99.

“Supporting our partners in creating these special boxed editions is a great accolade for Strictly Limited Games, as Ys Origin is an iconic, timeless RPG which has lots of history and is now being played, enjoyed and in demand for all generations of gamers. We helped make the best possible version at a very reasonable price to both delight and captivate Switch players”, Dennis Mendel, co-founder of Strictly Limited Games. 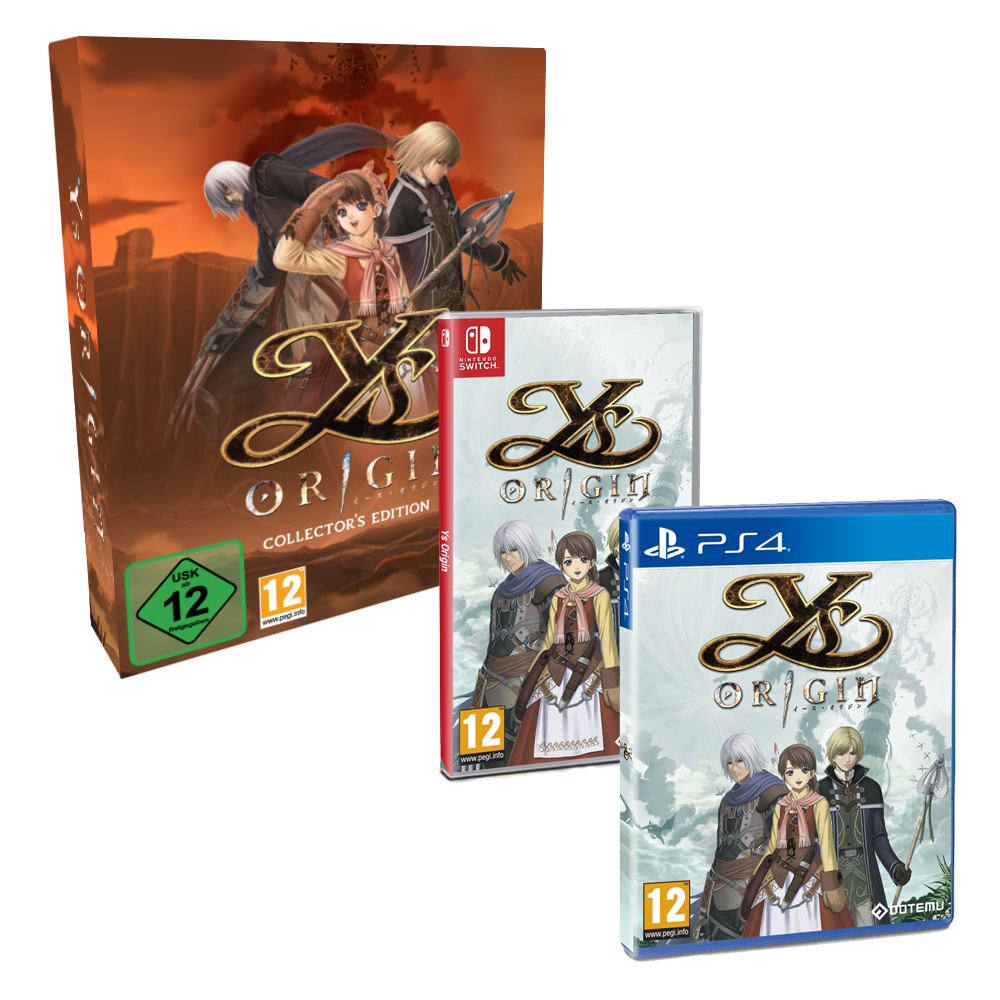 Ys Origin presents a game through an emotional and exciting story, which takes place 700 years before the two first games of the series – Ys I & Ys II.

A demon invasion threatens the land and the two goddesses of Ys vanished. The player sets off with a search party to follow the tracks of the goddesses. Fans of the series may expect to play as the well-known protagonist of the Ys Series, Adol Christin, but this time the player has the choice to start the journey as the apprentice knight Yunica Tovah or the sorcerer Hugo Fact. Ys Origin presents different playable characters with different skills. Yunica is the bright and optimistic girl focusing on physical strength, whilst Hugo is a calm, analytical young man with strong magic powers.

As the game progresses, the player gets the chance to unlock a third playable character and different areas and settings unfold throughout. The game features a great guitar soundtrack, that reminds of earlier Ys games. Both audio and visual presentation, along with superb control of your cast, makes for deep and exciting play.

* As always with these things, I like to be upfront with you guys. Savior Gaming does NOT receive anything for your purchase or pre-orders of these games, we just enjoy them and the company that produces them. We share this info so that if you choose to support them you have the option. As always thank you, and may the gaming gods bring you glory.*

Strictly Limited Games is excited to announce that they have acquired the rights for an exclusive, limited-print physical release of the PlayStation VR game Last Labyrinth – an escape adventure game on PlayStation 4. Pre-orders for the Collector’s and Limited Editions of Last Labyrinth will start later this year.

Last Labyrinth is a VR escape adventure game, where the player is trapped in an obscure mansion and joins forces with the mysterious girl, Katia, to solve numerous riddles in an attempt to escape from the mansion.

You are vulnerable and tied up. With your arms and hands bound and immobilised in a wheelchair, you are at the mercy and reliance of Katia. She is your only way of escape from the mansion in an intensive, meticulous and inventive series of escape room puzzles. The ever increasing complexity of riddles, and their diversity, which may be number related or brain teasing weight balancing, must be solved in order to venture on. 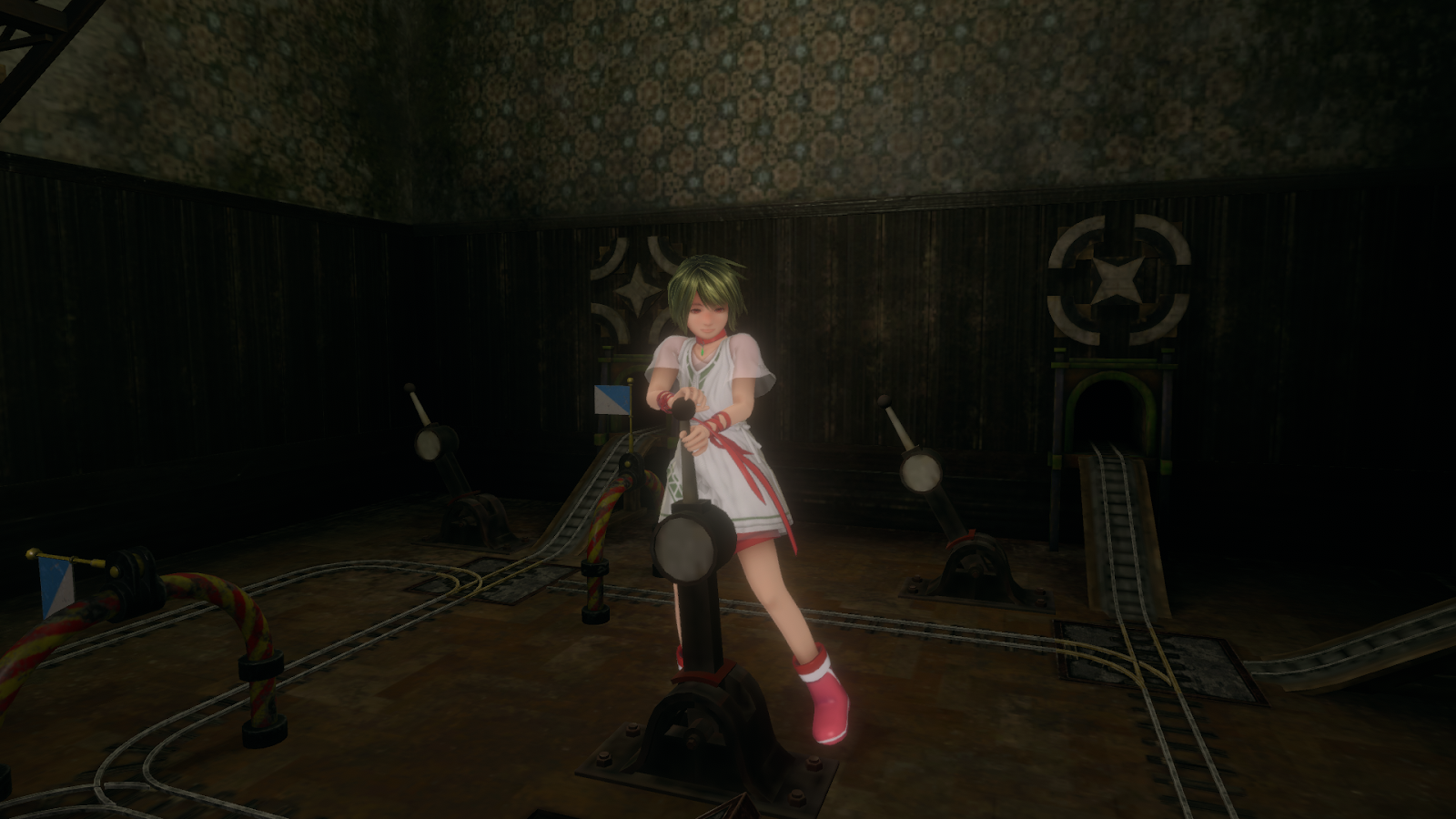 The expertise behind the creation of Last Labyrinth is unmatched within the VR genre. Created by a team of veteran Japanese developers whose previous works include classic titles such as ICO, The Last Guardian, Shadow of the Colossus, Puppeteer and the Doko Demo Issyo series (Toro, the Sony Cat).

The voice of the mysterious girl Katia is Stefanie Joosten, who played the role of the beautiful, wordless sniper “Quiet” in Metal Gear Solid V: The Phantom Pain. She works as a model, actress and singer in Japan and abroad. Stefanie Joosten feels honored to be part of Last Labyrinth: “It’s a huge honor to be part of Last Labyrinth. When I first played the demo, I immediately felt completely sucked into its mysterious world. It lets you experience VR in a way I have never seen before. I think it will be a completely new experience to players worldwide.” 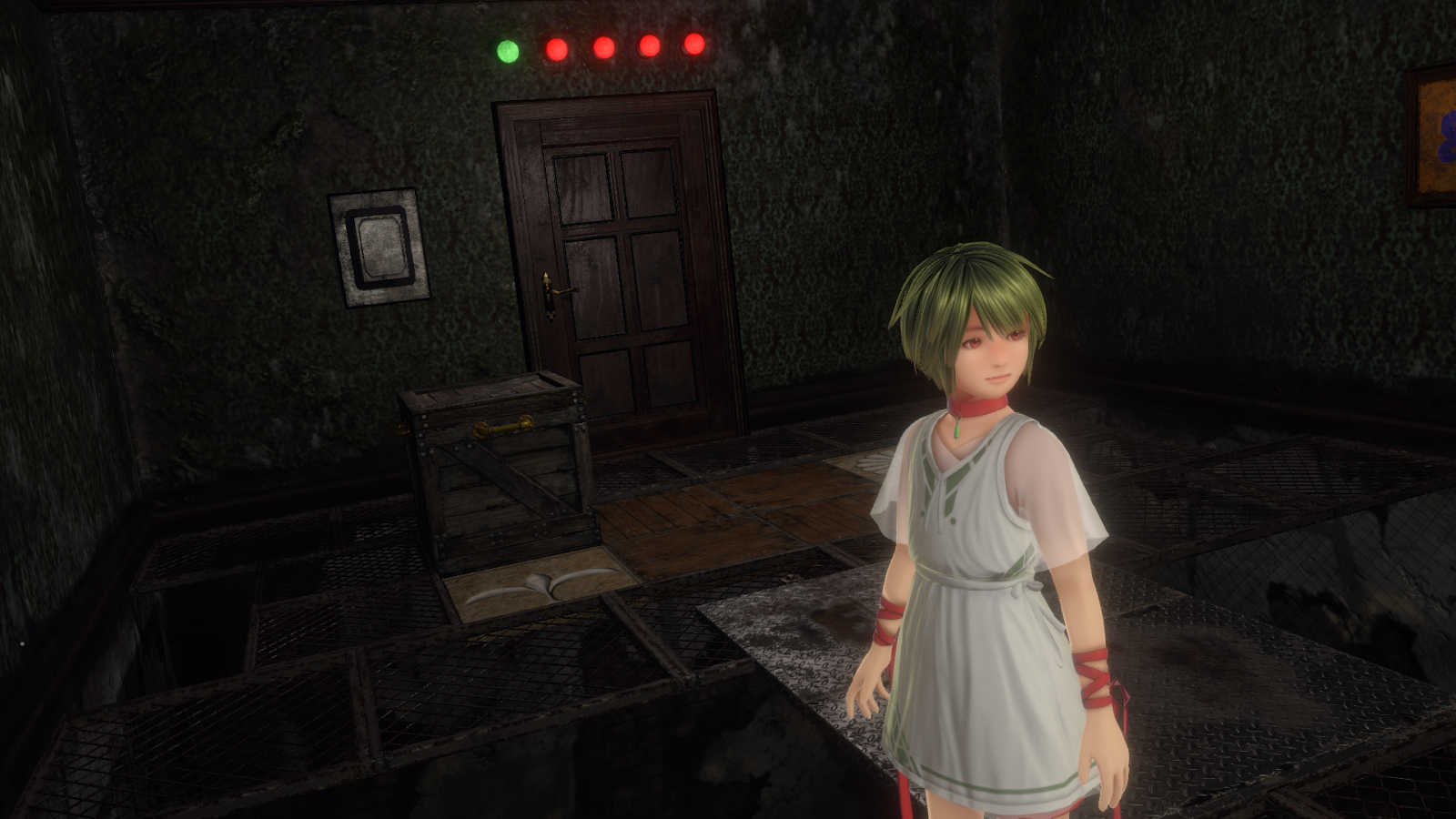 The theme song was composed by Hiroki Kikuta, who has worked on numerous games including Secret of Mana and Soulcalibur V.

Last Labyrinth is a virtually unmissable and distinctive encounter where reality is closer than you imagine. Can you escape a hostile mansion along with a girl words cannot reach?

Strictly Limited Games is a German publisher based near Stuttgart, specialized in releasing a curated selection of digital download-only games in exclusive collectable physical editions for PlayStation 4, PlayStation Vita and Nintendo Switch. The company was founded in 2017 by Dennis Mendel, a former scholar for game studies and advisor at Fraunhofer Institute, and Benedict Braitsch. Both passionate collectors with a combined collection of over 7.000 digital and physical games for all console generations, their intention is to form an opposite pole to the current trend of digital-only releases. All collectors’ editions are available exclusively at Strictly Limited Games online store www.strictlylimitedgames.com.

Founded in Tokyo in 2008, Amata K.K. has helped develop smartphone titles for a wide variety of world-renowned Japanese game companies over the years. With many staff having over 20 years of game industry experience, Amata has become a trusted one-stop shop for planning, developing and operating games across a variety of platforms. While keeping the focus on game development, Amata has also begun to expand into VR, video, media and other forms of entertainment.

Amata is a member of the Last Labyrinth Production Committee [LL Project], which released the digital version of Last Labyrinth on November 13th 2019.

Tune in for updates on PlayStation 4 and PSVR games, as well as previously announced PlayStation 5 games.

Thanks for signing up and being a part of Summer Game Fest. Play the Future….

And keep checking the website for more updates: http://www.summergamefest.com

Just wanted to give you guys a quick update on things with us here at Savior Gaming. Due to personal reasons Tor will be missing for a few days or weeks, or whatever he needs. He usually isn’t gone for long tho.

As for myself,I’m just working on finishing school up and possibly finding a job with my Commercial Drivers Licence. Learning to drive a truck has been pretty awesome honestly. School of course sucks as it always has and always probably will, but the actual act of learning about the different parts and aspects of it has been interesting. There are plenty of subtle things I never really knew about it.

That honestly is really all I have, I just wanted to let you know what we had going on. Best wishes and may the gaming gods bring you glory.

As always when I write these things, Huge shout out and thank you to Kube Games for hooking me up with a copy of this one. Been looking forward to it for a bit and was not disappointed.

Now to start off, if you have no real experience with the 4X/grand strategy genre every, you need a game that will walk you into it and teach you the ropes. I won’t say this is the best game to start with, but it certainly is not the worst. It has a nice tutorial that will take about an hour or so to get through. There will still be plenty of things to master and learn, but this will get you moving.

As you go through this you will see quickly that the game looks nice, not breathtaking but these games never do. We aren’t talking about a high-end developer here, what we have is a small group of guys that love what they do and treat it like their children, and it truly shows. The graphics and sound serve the game well and at no point did I run into any graphical or sound issues that made me feel like this game wasn’t worth investing my time into.

The gameplay itself does a fantastic job of recreating that one more turn feeling that these games are known for. Every road built and every field to keep the population fed takes you one step closer to whatever goal you are working towards.  That goal may be a new city, a new ally, starting a war, the choice is yours really.

That being said there were some things I didn’t much care for.  Sometimes it seemed like allies would just turn on you or do some odd things, even if it wasn’t what was best for them. Similarly, loyalty also seems to change at odd times, for some reason I’ve had troops turn on me while winning wars but they weren’t all that disloyal to begin with.

I honestly don’t know what to say about this game. I don’t feel I can explain in enough detail to truly explain it in enough detail what it all entails, but I don’t want to skimp out on telling you what a great experience on what the game itself is. I have played plenty of games like this in the past, and I enjoyed this one. If you are looking for something to scratch that civilization itch, this game just may do it for you. It is a solid 8/10, and one I will be enjoying for a while. Best wishes and may the gaming gods bring you glory.

Join Sable on her gliding, a rite of passage that will take her across vast deserts and landscapes littered with fallen spaceships. Explore at your own pace on your hoverbike, scale monumental ruins, and encounter other nomads in the wilds, all while unearthing mysteries long forgotten. For those in the know, the acclaimed Japanese Breakfast is taking point on the game’s soundtrack, which promises to be full of chill and emotional vibes.

Shedworks is a small indie developer founded in a shed in North London by Gregorios Kythreotis and Daniel Fineberg. https://www.shed-works.co.uk

Warhammer 40,000: Darktide
Fatshark brings the four player CO-OP experience to the 41st Millennium in 2021. Go deep into the hive city and face hordes of enemies you have only seen in your nightmares. Players will not be able to hide behind lethal ranged weapons, they’ll need to combine both FPS and melee skills as they get up close and personal in visceral clashes between Imperium and Chaos factions. Warhammer 40,000: Darktide will bring everything you have come to expect from the developers of the multimillion selling award-winning Warhammer: Vermintide franchise.

“I am happy to announce Warhammer 40,000: Darktide to the gaming world today. We are utilizing the knowledge and experience honed from the Vermintide franchise in this new take on the 40,000 universe.” says Martin Wahlund, CEO Fatshark. “We are bringing the four player CO-OP experience to a new setting, and we can’t wait to share the game with everybody in 2021.”

Get Updates on all things Warhammer 40,000: Darktide
www.playdarktide.com

The previously announced release date for Umihara Kawase BaZooKa! from ININ  Games for both the physical and digital release – Nintendo Switch and PlayStation 4 –  has been officially reset to September 29th 2020.

This delay will allow players to benefit from an improved worldwide multiplayer infrastructure, ensuring fast and stable online fights. ININ Games also took the time to add languages, to provide for a great game experience.

All editions will be localized into English, French, German and Spanish. The game will be available in Europe, America and Australia.

Enjoy the trailer, and may the gaming gods bring you glory.