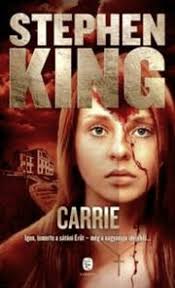 The classic that started it all for the legend that is Stephen King. I’m sure we’ve all either seen one of the 3 film adaptations or seen a parody of it somewhere, my first intro to Carrie was a moment in Tiny Toons for shit sake. If you haven’t been introduced to this classic, here’s the gist: a unpopular girl in high school gets bullied for being weird while at home she takes shit from her insanely over religious mother and learns she has the gift of telekinesis (the ability to move things with her mind.) When life looks to be looking up when she begins to understand the power and gets asked to prom by a popular guy, it violently goes to shit when she gets drenched in pig blood as a prank and Carrie goes apeshit. First I’m going to say I love the book. Every film has Carrie has a defenseless, skinny, quiet, girl but in the book we’re able to see her dark, hateful feelings boiling inside and her feelings on god which are interesting; of every adaptation I always enjoyed the book’s bleak ending the best. Carrie dies wounded on the side of the road after killing her mother, most of her classmates and destroying most of the town, just her and Sue Snell- the mean girl who took pity on Carrie. They talk one last time, Carrie driving her lifetime of pain into Sue’s memory like a nail, dying before sending out one last wave to scramble the minds of the town so they can’t remember much except that Carrie fucked them up. The 2002 film has an intersting ending where Carrie lived and her and Sue ran off, forever on the run. Of the films, 2002 was my favorite and most accurate to the book. For the original, Piper Laurie stole the show as Carrie’s mad mother, one of the scariest performances I’ve ever seen but Sissy Spacek is probably my least favorite Carrie. As for the 2013 remake, Chloe Grace Moretz gave a great performance as Carrie but besides that the movie was a modern day retread with DragonBall Z effects. Either way you go with it, it’s still a great story but I do recommend hitting the book first, it’s a quick but powerful read from a powerful writer.