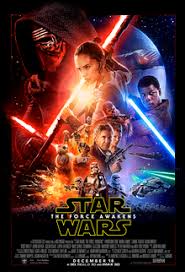 Thank the force we got a course correction for Star Wars after an ass load of (shiver) at the prequels. Yes, in many ways Awakens is a soft remake of the original classic but in no way a shot for shot remake.

After the fall of the Empire, a much more cruel force has started overtaking the galaxy in there wake. They call themselves the First Order and immediately we notice there dedication to the former Empire with the reinstatement of Stormtroopers equipped heavier and trained to exterminate Jedi, led by a figure in black named Kylo Ren tasked with killing off the Resistance led by a much older Leia. During an attack on Jakku, one stormtrooper sees the evil of Ren and the order first hand and decides to escape with a pilot named Poe they captured, crashing back on Jakku alone, finding a young woman named Rey who found Poe’s droid BB-8, who’s carrying plans for a new devastating weapon. Now named Finn, him and Rey journey to find the Resistance to return BB-8, coming across Han Solo who takes them to Leia as we see it was not truly a happy ever after in the years after Jedi. Luke had tried rebuilding the Jedi but there own son Ben Solo, Kylo Ren, had turned to the dark side much like his grandfather had, breaking Luke as well Han and Leia’s marriage. Finn and Rey are scared as hell, especially Rey who keeps having feelings she can’t explain, doing things she can’t explain, and having visions when she gets to touch the lightsaber that once belonged to both Anakin and Luke.  But the question remains, where did Luke Skywalker go?

I have to say the only real flaw I have with this movie is that it does feel very much like the classic film but I don’t think that’s necessarily a bad thing. I hated what Star Wars had become after the prequels, remasters, and overabundance of cartoons, comics, games, and shit that never captured the feeling right. Awakens does for me. I love where the old characters stand as well as got invested in the new characters. I love the darker feeling, but that Finn, Poe, and Han added some levity. The movie is a good blend of practical and CGI unlike the prequels and thank god we didn’t get a over embellished, super fast, over choreographed lightsaber duel at the end. Kylo Ren feels similar to Darth Vader but I like his lack of composure and his depth, plus I love his lightsaber. Overall, I thought it was a great movie that put the series back on track and in regards to the originals I give it a A-. May the force be with you all.

9 thoughts on “The Force Awakens”