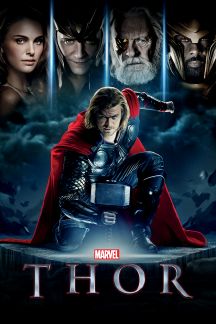 We arrived to our final MCU installment before we finally talk Avengers; sadly our local theater closing screwed up us seeing Black Panther til it hits blu-ray. The fourth movie in Phase 1 introduces Thor, god of thunder.

Thor and Loki are the sons of Odin, king of Asgard, a beautiful kingdom in space. Thor is arrogant but powerful as he is set to one day become king; Loki, believing his brother a shitty king, plots to embarrass him and when Thor nearly reignites a war with the frost giants, Odin banishes Thor to earth, stripping him of his power and his hammer  before going into Odin-sleep, leaving the treacherous Loki to reign. It’s up to Thor to reclaim his power and hammer and learn what it is to be king and kick his brother’s ass…

As superhero films go, Thor is a solid film. It’s not great; there is a lot of dialogue that makes it feel a bit longer than it really is and not very much action, though what we get is nice. Where it succeeds is Chris Hemsworth and Tom Middleston as Thor and Loki and visually the movie looks great. I got some good laughs and a few moments I still quote today. In the end, it’s a decent movie that’s pretty much a prequel to Avengers. May the gaming gods bring you glory.