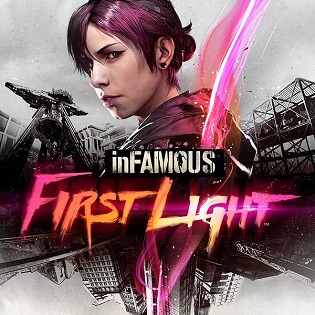 With many of us quarantined and the world dialed to the max on crazy, I needed to escape into a good superhero game. I took a dip back into the aged classic Batman: Arkham Asylum and I wasn’t ready to revisit Marvel’s Spider-man (PS4) , I thought it might be a cool opportunity to give First Light a try.

First Light is the story of Abigail Walker, better known as Fetch, and the tragic events leading up to her fighting Delson in Infamous: Second Son . Fetch and her brother, Brent, have been on the run since there parents tried selling out Fetch for her powers. Homeless, desperate, and battling her demons of her neon powers and drug addiction, Fetch is sent on a revenge quest against a aspiring drug lord Shane as she learns to accept her gifts…

Doing a Fetch solo DLC was a smart idea because she continues to be one of the coolest part of Second Son. I loved zipping around at super speed and the amount of abilities you get are pretty impressive and some different than what you get from Second Son. The story is quick but the finale is satisfying and Fetch is a compelling character to follow. I must admit though, in a rare turn of events, I actually had more fun with the side stuff than the main game; the sniper missions got annoying quick and I failed a lot because of the sheer amount of guys on screen. The biggest problem I had was the colorization of the map which is a lot of similar colors that can be a pain in the ass to read. While not perfect, it’s a good quick burst of game if you don’t want to devote days or weeks to. May the gaming gods bring you glory.