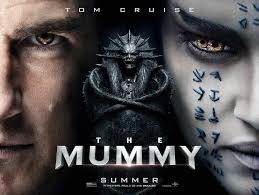 I’m dedicating this post to a dearly departed mentor and friend of mine, Mr. Don Walsh, who loved the classic monsters and Halloween and knew what the season was really all about. The 2017 Mummy remake is literally everything wrong with modern movies and for my mentor and friend, I’m going to tear this bastard down and tell you why it’s ass cheese.

So it begins with Spooky Shield- I’m calling them Spooky Shield- led by a posh, one glove wearing Dr. Henry Jekyll in a tomb looking for a red gem. Then we get Princess Mummy’s backstory. Ok, I’m saying this right now, I have no problem with the Mummy being a woman nor the actress who portrays her. Her story was fine and I’m sure she would have been really good if Universal didn’t try making her sexy as well as threatening. Anyway, we cut to Tom Cruise and his friend playing some live action Uncharted in Iraq. Tom Cruise tries his ass off to be charismatic and keep this movie afloat; I’m not even a Tom Cruise fan but I applaud the bastard for trying. So on accident he stumbles on the tomb Princess Mummy is buried- because after she was mummified alive, they took her all the way from Egypt to Iraq to keep her away from the crystal. So we find out Cruise had some military connection because the Army shows up and decides “let’s take this old Sarcophagus because reasons” and we meet the love interest who’s a archaeologist and who’s pretty much there for exposition and to get kissed by Cruise at the end. As soon they army takes the Sarcophagus, Cruise gets images where a not rotted Princess Mummy shows him stuff and flirts with him. Suddenly all of this apocalyptic shit goes down like the minute they leave the tomb, sand storms, random birds going batshit, the works. Cruise’s friend gets bitten by a spider on the plane out, gets possessed by it and gets gunned down by Cruise because he started killing people. So the plane crashes, Cruise gets hurled out of the plane and doesn’t have a scratch on him because Mummy curse. Ok. Sure. His dead friend starts doing his best Griffin Dunne impression from American Werewolf in London and keeps revisiting Cruise in his Pg-13 zombie ghost glory. So we see Princess Mummy come alive and…to me it looks likes she kills you by making out with you because pounces and multiple times it looks like she’s frenching your life away. She restores herself back to a sexy grey with black tattoos and a skimpy set of bandages that leave just enough to the imagination because I surely wouldn’t think dream of finding sex appeal in a mummy. So more visions and expositions and finally Tom Cruise and Princess Mummy meet. Not going to lie, they milk the fuck out of her walking in slo-mo against a hazy background. Well, when all is lost, she gets harpooned a bunch of times by Spooky Shield and they’re taken in. Here comes the barrage of Marvel ripoffs- Jekyll has a liar full of monster Easter Eggs like vampire skulls, old fashioned tools, and a jar with a certain webbed, scaly hand in it and we get a assload of exposition from Jekyll, including the revelation that the Mummy will always haunt Cruise’s ass because he was the first person to come across her; there’s another scene that feels like a half-assed Loki scene from the first Avengers. So we find out Jekyll has a dark secret of his own because he constantly carries a silver briefcase and constantly keeps injecting himself because him and Spooky Shield are scared shitless of him being Hyde. Cruise and Hyde fight, which Hyde is a joke. His skin darkens like a shadow casts over him and his eyes change color; I had to laugh because Spooky Shield acts like Hyde is the Hulk, an unstoppable badass, and he ain’t. He gets his ass kicked by a normal guy. So Princess Mummy escapes, Tom Cruise kills himself with the Death God dagger, became a living good mummy that’s Set personified and kills her and sets up a sequel. FUCK!

This movies sucks emu balls. I really can’t tell you how bad this movie pissed me off. You can definitely tell Universal tried way too hard to ripoff Marvel to form its cinematic universe and they blew it worse than other company has. There is no horror, simply special effects and attempts to be something else except what it should’ve been. Tom Cruise tried his ass off to be charismatic and likable but shit there ain’t no saving this turd fest. The effects suck, the story is bloated and boring, and it’s trying too damn hard to be trendy. The old Universal monster movies were great and made to frighten people, intrigue people, and they became legendary for a reason. The 1999 remake wasn’t a horror movie but it kept a horror element and gave the movie it’s own life without harming the reputation of the franchise. Watch that. Piss on the 2017 copy. Best wishes to everyone out there and may  the gaming gods bring you glory, because friends don’t let friends watch Mummy 2017.