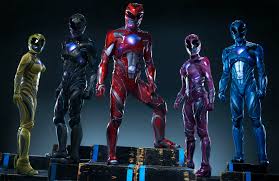 I promised @torstenvblog I would toss his review in here early so you could see his, so you can see that here Power Rangers. I will also say this, the movie had some nice comedic parts, the characters were good and well played and was entertaining at times. If you just wanted to see the positive now is the time to stop reading. Because I am about to trash this movie for a number of reasons.

To start, the opening scene with the cow gave me hope, but then the movie turned into The Breakfast Club. Seriously the dad even pulls the line about blowing his ride as he drops him off for Saturday detention.

Moving on to them…finding the power coins laying around…randomly, not sure how that even works out, they now move on to ripping off the Spider Man movies.Seriously the punching the sink knocking out a bully and even jumping a cliff ( yes I realize Spidey did a building) this movie didn’t seem to have an original scene in the first hour and a half of a two hour movie. Hell even Trini essentially ripped off the Karate Kid.

Not to mention when the hell did the power rangers become super heroes when not morphed? Now their suits ( that are now basically mech suits for protection) are basically super heroes. They have super strength, superior speed, reflexes recovery power and durability. Seriously the suits are really just there as armor and weapons.

Next we get to Goldar, who is literally just a pile of amorphous solid  gold in the general shape of a monster. The movie moved so far away from the source material calling it a power ranger movie has no meaning. Yes the movie was entertaining, but calling this a power ranger movie is a stretch. Best wishes and may the gaming gods bring you glory.