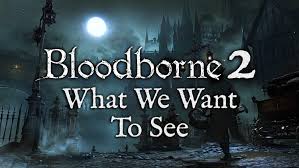 As many of you know I love the Bloodborne series and have mixed feelings on Dark Souls. That being said From Software made some great games but people often forget Sony owns Bloodborne, not From Software so we could get a Bloodborne 2 with or without From Software. However here are just some things I would love to see if we get that ever elusive sequel.

First and most important, I want From Software at the helm. I may even go so far as to say without them I don’t really care if the game never comes out. They have the experience with the genre and know exactly where everything came from and where it was going. I don’t see a reason to mess with what worked.

Second while I want more of the Victorian high-speed bosses we had in the first, I really would hate to see a bloated beast of hidden bosses that were all the same like we did in Dark Souls 2. That really killed that game for me and many others.

The trick weapons for me were amazing, they were all pretty much viable options and I hope that stays. I am sure they will add more weapons, but they really need to keep the ability for any of them to be usable for PVE. They all felt different but they all felt like I could use them to beat the game with the proper build and set up.

Another cool thing to see would be while I love the insight and all the things you do, the necessity of it to use co-op is rather annoying. Early on it limits you even being able to use it which is a pain and later on unless you are just burning thru it at the insight well you will have so much it becomes pretty meaningless to need it. Just let me run though the place butchering stuff with my friends please.

The one last thing I would like, is please bring back the chalice dungeons. Some people loved them, some people hated them or ignored them all together, but in the end they supplied so much replay value I can would hate to not have them at all. Best wishes and may the gaming gods bring you glory.