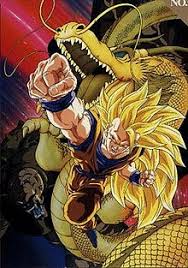 Hey, wait a second, aren’t I forgetting a movie? Didn’t Broly have a third movie before Super? Why, yes, reader; yes he did. Bio-Broly was white hot liquid dookie and shall not be spoken of on the blog, nor should it be spoken of by anyone…so let’s talk about Wrath of the Dragon instead.

Ages ago there was a dark wizard (not Babadi) who created a unstoppable badass with magic (not Buu) who rampaged a whole world. There was a hero named Tapion who could save everyone from a terrible monster, Hirudegarn who could potentially destroy the universe. When informed of this legend by a mysterious alien, they release Tapion but also half of Hirudegarn. Young Trunks befriends Tapion and restores his confidence but the unstoppable Hirudegarn is complete. Can Tapion and the Z Fighters stop this latest threat?

I have to admit, my recollection of this movie is pretty fuzzy but it was a solid movie. Hirudegarn is cool and it and funny seeing some of the series’s biggest badasses getting beaten down by a torso and a pair of disembodied legs. Tapion was a decent character but he was mostly forgettable. The connection with Trunk and the sword at the end was kinda corny. Overall, it’s not the worst DBZ movie but not the best so it’s Ok to miss. May the gaming gods bring you glory.