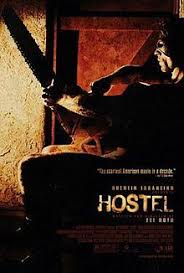 Two friends, Josh and Paxton are backpacking through Europe with a dude there hanging out with, looking for hot babes, booze, and drugs. During a party, they meet some hot chicks that tell them about a awesome party town with a cheap hostel they can stay at. Everything is fun until there friends start to disappear and the folks around town deny knowing anything about the disappearances. It isn’t long before the friends discover they’ve been tricked into a sadistic network of rich men who pay to come torture and kill people at there leisure. The question is, can they make it out when the whole town is in on the conspiracy?

I have to say, this movie is pretty damn overrated but solid for the most part. The acting and score are fine but the atmosphere and premise are the selling points. There are some pretty nasty gore scenes, but it’s nowhere near as extreme as the sequel will be. The dialogue, like many Roth films, is vulgar and awkward and the pacing is slow to start but it fairly thrilling from the second act and on. The revenge ending is pretty satisfying I admit and the world is pretty interesting and makes you want to know more. In the end, it’s a pretty fair movie but I wouldn’t call it a modern classic as some would so it’s worth watching. May the gaming gods bring you glory.

One thought on “Hostel”