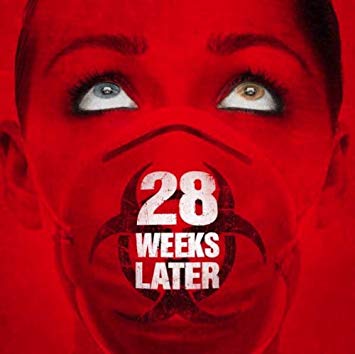 28 Days Later is hands down my favorite zombie film and one of my all time favorite horror movies. The sequel, many consider to be a superior sequel or at least of the prestige few horror sequels achieve by being near as good as the first.

We join a family torn apart during the Rage virus outbreak in Britain. John and his wife were hiding out until a massive swarm descended upon them; he watched his wife seemingly get devoured and instead of trying to save her, he ran. 28 weeks after the outbreak, NATO declares a small part of Britain is clean to re-inhabit and the Rage virus has been cleared out. John is reunited with his kids Sam and Andy, who discover that there mom is still alive after breaking quarantine. In her blood is a natural immunity to Rage but she still is a carrier and highly contagious. And with a single kiss, the hope of that the Rage virus was destroyed comes to a violent and bloody end…

That last part I can’t stress enough, 28 Weeks is way bloodier and more disturbing than the first. There were a few times where I felt my eyes pop open in surprise how far it went. While I admire the choice, I also feel the gore became too gratuitous for it’s own good ( the helicopter scene as an example). I will say, the movie continues the original’s legacy of good characters and being filmed really damn well as well as being genuinely scary. What’s nice is this is a completely standalone sequel so you don’t need to have watched the first one. The opening is expertly done and one of my favorite opening horror scenes. Something I regretfully have to say unfortunately besides the overuse of gore, I hate the couple jump scare scenes they add in but, to the movie’s credit, only one is just totally fruitless. In the end, 28 Weeks Later is a damn good sequel I’d highly recommend and may the gaming gods bring you glory.