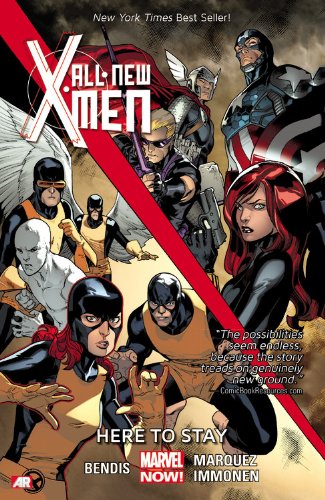 Awhile back I covered the first volume of All New X Men, All New X- Men: Yesterday’s X Men as covering pieces of there story here and there. I loved seeing the original 5 kids in the limelight, who I feel deserved more respect and went into the backdrop in favor of more popular characters like Wolverine, Storm, and a few others. So how do the story of our young time displaced mutant heroes continue.

Things have been better for the young classic X Men: Cyclops, Marvel Girl, Iceman, Beast and Angel. Cyclops, rebellious and distraught over the future betrayal against the X men, seeks to try setting things right- starting by running away with Logan’s motorcycle. Kitty Pryde tries to comfort Jean as she struggles with her blossoming telepathic abilities as well as trying to discipline the team. Angel, finds his future self, carefree wings a rebellious streak, metal wings, and new powers; Angel discovers his fate at the hands of Apocalypse and freaks out, getting mind swept by Jean in a dark move. If the growing turmoil wasn’t problem enough, Mystique is going on a rampage with Mastermind and Future Cyclops announces a new school for mutants, preparing them for the revolution to come. Is this too much to handle for our disjointed heroes?

I have some mixed feelings on this book but for the most part I enjoyed it. My favorite part was Angel’s part, seeing him fighting alongside Archangel and seeing the trauma he suffers about his fate. Jean Grey also has a really cool arc where you see a darker side of her as she starts using her telepathic capabilities recklessly. The only arc I wasn’t that into was young Cyclops’s; more than a few times I thought he was becoming a brat rather than a sympathetic character. He had the biggest arc which made the beginning seem to crawl a bit but thankfully the cliffhanger ending saved it. The art is solid and the writing is pretty good, making me laugh and keeping me connected. In the end, it’s a solid read if you want to follow the All New X Men series. May the gaming gods bring you glory.