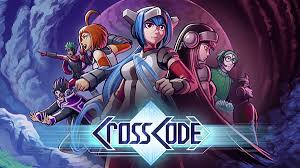 A few things I want to get out of the way before I begin. First as always, a huge thank you to the people over at Deck13 interactive and everyone involved in this game for tossing me this review copy. It was a magnificent throwback to the 16-bit era. And if you are one of those collectors that love the hard copy of things, they have you covered here at https://crosscode.inin.games/ where you can get it on PS4 or Nintendo Switch from a base version all the way up to collectors editions that are individually numbered. ( Also, I do NOT get any sort of kickback for mentioning that, they just asked me to include it and since I enjoyed the game I was happy to oblige) The last thing I wanted to say is that I do apologize for this review being later than they usually are. Like many, COVID has slowed some things up and caused some issues.

Now on to the review itself. Graphically, if you are looking for a AAA title with flashy graphics that will push the bar higher, this game isn’t made for you. They clearly made this game for those people that love the good old days of 16-bit era RPGs like  Secret of Mana or the newer Cosmic Star Heroine, except what many of you won’t know is this game came out a bit before Cosmic Star. About two years in fact. I would put the two games in the same class in terms of quality tho.

The battle system is also pretty standard for the genre. You will walk around, run into enemies, and instead of entering a new scene for a battle you will stay and fight in that field in a fast-paced yet strategic way. You will have attacks from a distance or up close. It doesn’t do anything to reinvent the wheel, but it turns just fine.

The story is pretty unique, that isn’t always a compliment. I don’t have an issue with it, but I wasn’t entirely fond of it. The game starts with what is basically an interactive cut scene but it isn’t much explained until later. You then will play as Lea, a typical mute girl most old RPGs have, tho this game explains why she is mute. That is actually much appreciated. It will be explained that you are actually just more or less an avatar in an MMORPG called CrossWorlds. I won’t go much more into the story than that because I don’t want to spoil anything because while for me I didn’t enjoy I do think that was a personal preference. Others that I have talked to enjoyed it and thought I was insane.

Now the reason you are all here, do I recommend this game? Sure, the price is more than fair, and if you need something to scratch that nostalgia itch this will do more than that. I may even add it to my Nintendo Switch collection so I have an old school RPG in the go. 7/10, would absolutely buy this myself. Best wishes and may the gaming gods bring you glory.