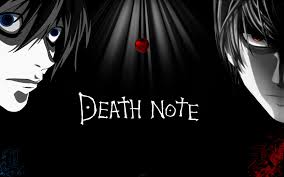 So in the fabled year of 2014 when life was Ok and I was almost another person in almost another life, a close friend and original battlebuddy SniperElitest gave me an amazing B-day gift: the complete Death Note anime collection and after that I got hooked into anime. Many people who stereotype anime as violent cartoons full of flashing lights and tall haired buff people that fight and kill each other need to watch this particular anime. Duke, thought Dragonball Z was drawn out and boring so thinking outside the box I introduced him to Death note and he fell in love with anime too. Death Note is the story of bored genius teen Light Yagumi who one day comes across a mysterious notebook called “Death Note” that falls from the sky. He takes it home with him and reads the rules inscribed in it: the first being that anyone’s name whose written in the Death Note will die as long as the owner can picture the victim’s face in there mind. Light is visited by a strange creature, a Shinigami- a death god named Ryuk who sheds light on the situation and helps explain the power of the note, urging Light to try it. Light discovers it’s power are true, watching a robber die just how he wrote it. Light decides to use the Death Note to rid the world of it’s evil people, acting as the “god of the new world” under the moniker Kira- or “Killer”. The world becomes enthralled with the phenomenon, murderers, corrupt officials, warlords, terrorists, child molesters and rapists all magically dropping dead or coincidentally succumbing to fatal accidents. Light’s father is in charge of the task force in charge of hunting down Kira, but on there own they are no match for his intellect. Until L comes along, a odd famous investigator that reaches out to the police to help them catch Kira. From the start, L proves to be a match for Kira’s intelligence, suspecting Light is Kira from the get go. He keeps tabs on Light, watching every move he makes but Light manages to prevail. But a disturbing revalation comes to both L and Light when a second Kira emerges with another note of there own. Enter Misa-misa, a air headed model and pop culture sensation obsessed with Kira who falls madly in love with Light. Ryuk tells Light of a special “deal” the owner of a Death Note and a shinigami can make- in exchange for half the owner’s life span, the owner can borrow there sight and suddenly see the full names of anyone he sees. Misa made the deal with hers. Light charms her into being his accomplice while him and L clash wits and minds as the new world unfolds…but who will come out on top?

The anime is great, not one of my favorites but amazing all the same. It drags and being 37 episodes that says something but it’s full of complex thoughts between the main characters so I can understand. The music is catchy as hell; the animation is gorgeous. Definitely watch it…

So the Americanized Netflix movie? Eh…I hated it. It took the basic premise of Death Note, took out most of the twists and turns and gave us a emo teen romance story. Light Yagumi went from a character starting out as someone with good intentions that becomes a relentless murderer with a god complex who will do ANYTHING to reach his goal. In fact, when he freaks out over the very idea of killing his dad killed the movie for me; in the anime, when push came to shove he did and didn’t have one shred of remorse for it. Mia (formerly sweet, idiot Misa-misa) was more of what Light was supposed to be like. Another huge problem I had was that Ryuk was clearly the villain and actively tried to screw Light where the anime made Ryuk a grim spectator, unable to interfere with the note. The score is replaced by music that reminds me of a more emo John Carpenter knock off. Willem Dafoe is by far the best part of this thing as the voice of Ryuk and the dude who plays L is ok; there’s some decent Final destination style kills but that’s about the best it’s got to offer for me. Don’t watch this if you saw the anime first, you will get pissed.