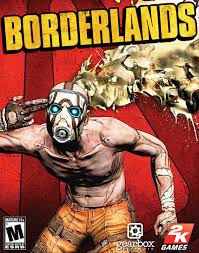 There really is no rest for the wicked when you’re a Vault-Hunter. Borderlands is a fun first shooter, open world RPG revolving around four strangers searching for a legendary alien vault on planet Pandora: Mordecai the hunter, Lilith the Siren, Roland the soldier, and Brick the Beserker. Each character has there own play style and special talents. For example Roland is a expert with a assault rifle and shotgun that can deploy a turret that can upgraded to fire rockets as well as attach an elemental damage onto the gunfire. All four characters are fun but they don’t really have an identity. The game is fun but repetitive and man the final boss sucks. I had a lot of fun gathering loot in the form of guns, shields, grenade mods, and class mods and leveling up. The downside of leveling up is that it drags a bit. Borderlands has some of the best DLC I’ve ever played and in it comes more of the crass humor the series becomes known for. If you ant a heads up to be a epic badass, choose Lilith, who becomes OP as hell real quick (a tip from Torsten V). In the end, Borderlands is fun but kinda meh but with some decent humor and a cool intro cutscene. Cage the Elephant anyone?