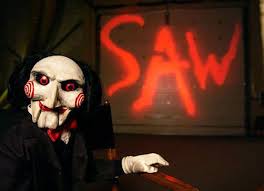 Anyone want to play a game as I dig into the Saw movies per Savior’s request? No, well shit. Saw is a crazy huge modern low budget that spawned eight movies, two video games, and arguably the film that helped kick off the “gorno”  phase of horror films in the early-mid 2000’s.

Saw is the story of Dr Lawrence Gordon and a dude named Adam who wake up chained by a foot in a dingy bathroom with a dead body, a few strange clues, and a hack saw and are basically left to piece together what’s going on. Gordon recounts the stories he’s heard of the “Jigsaw Killer”, this killer that drops people into deranged and disturbing deathtraps they have to overcome or die. The most famous example of this is the first survivor we encounter, Amanda. A druggie, she awakens with with a strong, rusty metal contraption wired into her mouth that will pretty much break her head apart like a reverse bear trap; her salvation rest in the stomach of her past cellmate and with a a couple minutes to decide she has to cut him open to get the key before dying. We also join two cops on Jigsaw’s trail as they question Gordon, sure he is the culprit. Another player in this game takes Gordon’s family hostage and it is him left with the saw and the choice, how far will he go to survive?

Saw, as a standalone film is pretty solid. It was one of the earliest, if not the first movie James Wan ever did, and you can tell the man who would later give us the modern classics Insidious and The Conjuring has talent; he is one of my favorite directors today. Stylistically it’s interesting. The traps are interesting and actually pretty realistic which adds to the creep factor. Tobin Bell’s voice is iconic now for Jigsaw and the first time you hear his voice with the puppet it’s fucking creepy, I can’t lie. The ending of the movie is actually pretty cleaver and punctuated perfectly by a great score. The only real flaw I can say is sometimes it feels slow and essentially, yes half of the movie is two dudes talking in a filthy bathroom.  I’d recommend it. Thank you as always and may the gaming gods bring you glory.