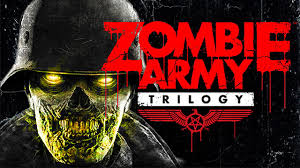 Like shooting games? Wanna shoot zombies? Hate Nazis? Have I got a game for you. Zombie Army Trilogy is a game where Hitler has a secret plan. When World War 2 went south for the Nazi side of things Hitler turned to the occult, and the results were Hitler and his army being turned into an army of the undead. The controls can be a little stiff at times but they are perfectly usable and while the sound and graphics aren’t what I would call top notch I won’t complain about them either. The game is both challenging and fun. It also offers both a  story mode and horde mode both available in single player and online multiplayer. Casual gamers may not like it, but zombie shooter fans will enjoy it. Now get out there and shoot some Nazi zombies, and may the gaming gods bring you glory.

One thought on “Zombie Army Trilogy”