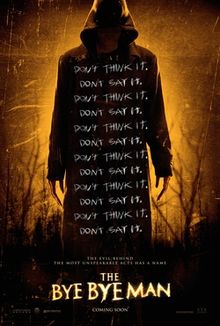 It’s been a long time since I saw a movie quite like the Bye Bye Man. Once in a great while I see a horror movie so bad it’s funny, which is why I’m regarding it as a comedy too. All the better is it’s not like Evil Dead 2: Dead by Dawn , which know it was goofy and this movie basically tries to be as serious as it can be with a hack premise. But the question is, how bad are we talking?

In typical horror cliche fashion, three college kids rent a old house near campus. While cleaning out the old furniture, they find a old nightstand with a bunch of deranged carvings on the the inside reading ” don’t say it, don’t think it.” and the words the Bye Bye Man. From there, the teens being seeing things and a tall man with a dog stalks there’s minds but they can’t stop the urge to spread the madness of the Bye Bye Man…

As a horror movie, Bye Bye Man is utter crap but as a ” so bad its good” movie its freaking awesome. The imagery behind Bye Bye man isn’t explored at all like the train images or what’s up with him and his dog. The acting was hilarious, especially from the lead actress and one particular scene from the lead character in a car that had me in stitches. The effects are laughably bad. The movie doesn’t really drag so that’s a positive. In the end, stay away if you are looking for scares but looking for unintentional laughs, step right up. May the gaming gods bring you glory.

One thought on “The Bye Bye Man”