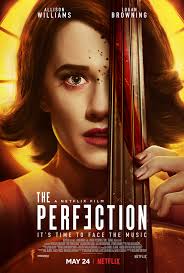 I have a strange place in my heart for movies that make me say “WTF?”, especially more psychological endeavors like May (2002)  or  The Witch: a New-England Folktale . My last jump into Netflix horror was I am the pretty thing that lives in the house which didn’t really do anything for me. What lured me were claims of how controversial it was. By the end I wasn’t able to speak.

Charlotte was a cello prodigy who left her prestigious music school to care for her dying mother, leaving a life of fame behind. She returns to the posh world of classical music she left behind, finding another young prodigy, Lizzy, has taken the scene by storm. There mutual mentor, Anton, says they were the greatest pupils he ever had. It just so happens Charlotte’s last day was Lizzy’s first and there talent seems equal. They hit it off after a duet together, and after a night of dancing and love making, they go for a trip that goes horribly wrong when Lizzy gets sick and the question goes: how far will some go to find perfection…

There is a lot to the story I don’t want to spoil but there is a crazy amount of twists and turns I didn’t see coming. What I feel is the movie’s strongest attribute is how well it switches between romance, drama, horror, and revenge thriller. The scenery and music are beautiful and the acting is well done, especially the romantic chemistry between the lead actresses. The only real gripe I have is it’s annoying how the movie literally rewinds itself after a major twist to replay what’s really going on and there is a really weird camera choice for the final climax. I have to say while satisfying the ending feels a bit abrupt. Regardless of some bumps, the Perfection is a damn good movie with a story that will keep you guessing and I recommend it. May the gaming gods bring you glory.