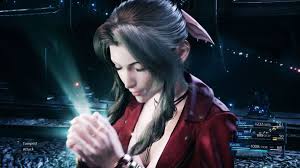 This week we saw the battle system in action and found out this first release of the multiple game release for Final Fantasy 7 remake would simply be inside of Midgar. They have been pretty up front about this being expanded upon greatly, but honestly considering it will be a fully priced game and the fact that I have already played the whole story, and other games like Witcher 3 and Elder Scrolls Skyrim have been hundreds of hours at release, I see no reason for this game to be this way outside of Square Enix using it as a massive cash grab because they know fans, including myself, will buy it anyway.

Don’t get me wrong, I don’t think this will be a short game. It will be beautiful and surely 40-60 hours long, of that I have no doubt. But they are still splitting up a game that doesn’t need to be split up just to sell it multiple times.

The battle system also seems weird, like they are attempting to placate older fans with the ATB system while making it more appealing to newer fans with it being more action oriented, and in the end this won’t really make anyone truly happy. it will mostly be mashing buttons to charge up the gauge and use an item or an attack then to mash more buttons. The materia being shown in weapons is pretty cool, and I like that idea. But to say I have some issues and concerns, is putting it mildly. Best wishes and may the gaming gods bring you glory.