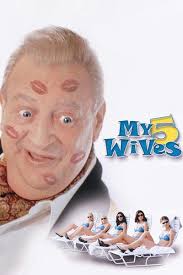 My 5 Wives is a 2001 comedy starring the late and great Rodney Dangerfield. The plot of the story is simple, in Nevada, there is a community where polygamy is still allowed. This is having multiple wives. (Yes this is a real thing) A friend of his tells him about some and up for auction that would be great for a ski resort. Being the super-rich businessman that he is going through his third divorce he goes to check it out and drops a few bucks to buy it. It isn’t until after he learns he must join the church in order to buy the land. With this comes the three wives of the former owner.

So while his sex life gets kicked up to a level he has never before experienced he donates money to the community, starts making plans for the ski lodge and runs into trouble with the local bank manager that wanted the land for himself. This bank manager will stop at nothing to get him excommunicated so he can have the land for himself. Not long into the movie, Rodney will marry one of his wife’s sister and her friend after their husband dies. They need a place to stay and this is the only way to make it happen.

While all this sounds like the male fantasy, and at the start is portrayed as such we quickly see why there are drawbacks and the ladies quickly see there are other ways to live their lives. While a comedy and a decently funny one if you are a fan of Rodney Dangerfields unique style the movie does a decent job of telling an actual story and by the end of the movie the ladies come into their own fairly well. The movie wasn’t a huge hit with critics and truthfully I can see why. This is one of those like it or hate it movies, and I can’t imagine anyone loving it. I enjoyed it for what it was but I am a fan of Mr. Dangerfield. If you aren’t however you may be better of skipping this one. Best wishes and may the gaming gods bring you glory.