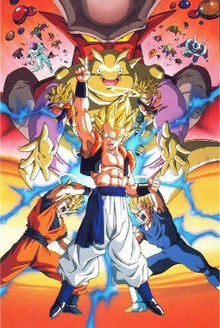 All hell basically breaks loose as a new entity emerges in the afterlife, busting the barrier between HELL and the living world. This means many of the familiar Z rogues have returned to Earth including Frieza, Bojack, The Ginyu Force, and Cell ( and a hilarious caricature of Adolf Hitler) and it’s up to Gohan, Videl, Goten, and Trunks to stop them. Meanwhile, in the afterlife, Goku finds a fat, yellow, baby like dimension warping creature called Janemba is the source of the commotion. Using the full power of Super Saiyan 3 he puts Janemba down, or so he thinks. Janemba returns in a sleek, more malevolent form and quickly overpowers Goku’s SS3 form. The only solution is to fuse with Vegeta through the fusion dance, which they’ve never done before. Can our heroes get there shit together and beat this dimension shattering foe?

Fusion Reborn is probably my favorite movie from the DragonBall Z: The Buu Saga era. The fights are badass and Janemba is a strange but fitting fiend I prefer over Buu if I’m going to be honest. Seeing other DBZ villains return was awesome and the Hitler cameo was easily one of the funniest moments I recall from anime. My only real gripe is that once Gogeta shows up,  Janemba is finished in about 3 seconds, feeling way too abrupt for my taste. Fusion Reborn is a cool, pretty badass movie I recommend to any DBZ fan. May the gaming gods bring you glory.