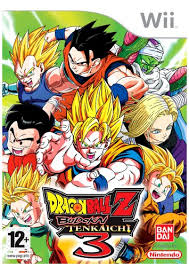 Has anyone ever picked up a licensed video game, yearning for the experience to live out your favorite series? You ever feel a heap of soul crushing defeat when you realized this game was crap? Well, good news, this post won’t be about that terrible experience.

Dragonball Z Boudakai Tenkaichi 3 is is the best DBZ gaming experience I’ve had. Combat is fast and the areas are open. The character roster spans from Dragonball Z ( The Saiyan Saga) to DragonBall Z: Buu Saga (Kid Buu) and the full list of movies while including key moments from the original Dragonball and Dragonball GT as well as having a few What IF segments that are pretty good. The roster is impressive, including transformations that are show accurate; Saiyans can go ape during the night stages, you can fuse Goku and Vegeta as well as Goten and Trunks mid fight and the story mode evolves as the story does, instead of multiple one fight missions. Besides a full sized story mode, there is also a variety of tournaments and even a mini RPG surrounding a fight with Cell. Throughout the story, Dragonballs are hidden throughout  the environments and once all 7 are collected, the Dragon can be summoned and exclusive items can be found which is epic as hell. The entire time, I felt like I was in the show. It’s one of my favorite fighting games of all time and I highly recommend checking it out if you have a Wii or PS2. May the gaming gods bring you glory.