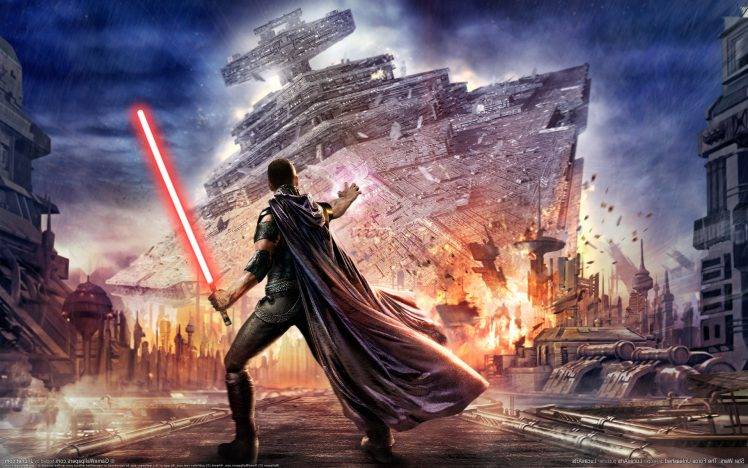 We’ve talked about plenty of Star Wars games on the blog from the critically acclaimed Star Wars, Knights of the Old Republic to the controversial Star Wars Battlefront 2 (EA) and royally overlooked Star Wars Episode 3: The Game . Well before Jedi: Fallen Order, which I’m currently playing, the Force Unleashed was the hyped Jedi experience. So how does it hold up about a decade later?

The story begins as the newly established Empire begins crushing a uprising on Kashyyk, homeworld of the Wookies led by a runaway Jedi. Darth Vader himself faces the runaway and easily brings him near death until a child stops him him delivering the killing blow with the Force. Vader, seeing the young boy’s potential, takes him as his secret apprentice christened Starkiller. Starkiller grows into Vader’s personal Jedi hunter over the years, slaying some powerful Jedi and crushing the rebellion struggling to form, until the Emperor discovers Vader’s secret and suddenly Starkiller’s vengeance is turned toward his former master…

For a game I played on PS2, this game has a lot to potentially offer but there’s some issues here and there. The story is solid but I liked the first half as Vader’s apprentice way more than the bland redemption story it becomes later. There are 2 endings and 2 different final bosses which is a nice touch. Starkiller is a pretty bland character so I can’t say he’s actually memorable. The gameplay feels much like the first God of War  with a pretty impressive ability to use the Force to interact with the environment, use lightning, and a host of other OP abilities. The game gets a bit overboard with the QTEs during the boss fights which gets a bit irritating and sometimes the controls can be a little less than graceful so you will get some bullshit deaths here and there. Character customization is pretty nice with a variety of lightsaber colors and decently cool skins. In the end, while I don’t think it was worth the super hype, it was certainly a solid game worth playing. May the gaming gods bring you glory.

One thought on “Star Wars: The Force Unleashed”