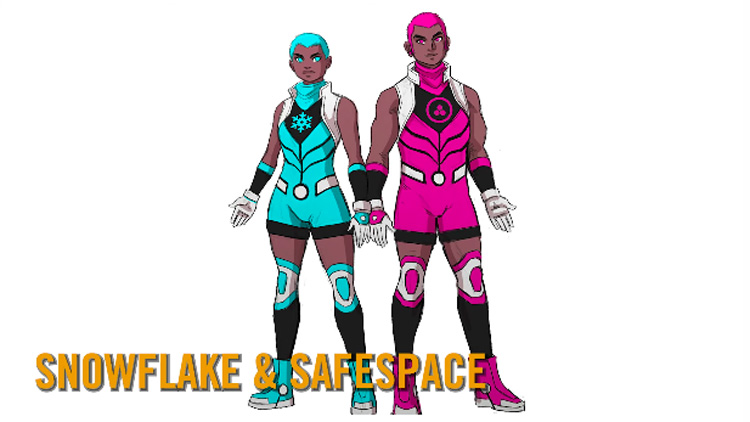 While Marvel reigns supreme at the box office, may have had it with there latest comic debacle in there attempt to prove how inclusive they are. Enter Snowflake and Safespace, two of Marvel’s latest new heroes as part of a new team of teen heroes and while none of the other heroes sound much better, these two are supposed to be non-binary twins. While I believe everyone deserves a hero and their are should be more varied, original heroes to break the barriers, I couldn’t take any of this seriously. The names alone are mockeries of the people they are trying to represent. I finally felt my last bubble of hope in Marvel comics deflate after the past few years. Before I begin, I just want to say there maybe a hot button topic or two here and while I applaud Marvel’s push for inclusion, I can’t say I approve how they go about it which is part of the few reasons they fell out of my favor.

Years ago, around the time Marvel’s popularity was skyrocketing because of the first phase of the MCU, they started transplanting many of there iconic characters like making Falcon the new Captain America, making Jane Foster Lady Thor, or Kamela Khan becoming the new Ms. Marvel after Carol Danvers assumed the persona of Captain Marvell. While a lot of these changes didn’t bother me, things like 2 factions of X men existing in the same universe and Kitty Pryde, Agent Venom, and the Thing joining Guardians of the Galaxy was a bit hard to swallow; Kitty becoming Starlord makes no sense to me. Some complained about the change of beloved characters but for the most part I was was able to see it making sense.

Around the same time, reading multiple series, I couldn’t help getting irked at the lack of solo stories, meaning there was a overabundance of Events going on. I recall them dropping one after another and it becoming too much of a hassle to follow. Something I give DC, there recent comics still include a huge catalog of solo stories for it’s characters. What also didn’t help was how Marvel’s multiverses ended up colliding in two many versions of the same character existing on the same plane; good luck being a casual and trying to talk about Spider-man and not knowing which Spidey you are following. now I know what you may be thinking, ‘ Torsten, why not wait til you can get the graphic novel and read it all at once’. Well, that would be a good point if not for the price tags. Since the MCU took off, the size of most solo Marvel graphic novels have shrunk as the prizes rise, especially for the Event books which declined in quality. Civil War II was not well received; Secret Empire angered many at it’s plot twist of Captain America being a Hydra agent all along. By the time Snowflake and Safespace came into play, my enthusiasm was far from healthy and I just shook my head, remembering the once amazing work from Marvel, which inspired myself as well as countless others. Someday I hope to call myself a current Marvel fan and call myself a true believer once more, but for now the present is bleak as the $ overrides creative wealth. May the gaming gods bring you glory.

4 thoughts on “Why I fell out of favor as a Marvel fan.”