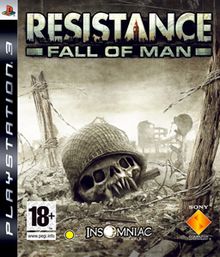 What if the horrors of WWII wasn’t a product of man but what lead to man’s downfall? Enter the Chimera, grotesque aliens that came to Earth in the early 1900’s and by the time WWII would’ve been ending, the Chimera are well on there way to domination. Can Sgt. Nathan Hale survive the war against these monstrous aliens and there impressive technology?

This was one of the PlayStation 3’s first games and in some ways it shows like the gimmick of having to shake the controller when a Chimera grabs you or the graphics that aren’t too distant from PS2 but it’s a damn solid debut. The story is a good looking apocalyptic war story that does has a nice, grim tone and feels surprisingly grounded. The Chimera are pretty creepy and fairly intelligent so they feel like a threat; while the human weapons are solid, the alien weapons are badass and a blast to use. Hale is a bland, generic protagonist but he’s serviceable. A mild issue I have is the environments are dull to look at and thankfully, the sequel has a bit more color. In the end, it’s a solid game that is worth playing if you want a solid FPS that you don’t have to  heavily invest in. May the gaming gods bring you glory.