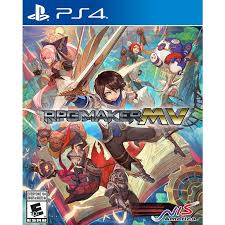 As this always starts, huge thank you to NIS America for hooking me up with a copy of this one. You all know I have a history with the PC release so I was very excited to see how it translated to the PS4. Now if you want some small details about how NIS America doesn’t publish the console version you can look at mt preview from earlier last month.

This however will simply focus on the actual game play. First the tutorial will give you the basics of what you need to do, and it does it quite well. It will show you how to add tiles and how to use those tiles to make structures and how to add maps. It will also show you how to then use events to connect those maps. This is a bit weird to explain, but essentially events are used to do everything from transitioning from one map to another, to talking to NPCs and creating shops. The can be as basic as talking to a kid in a village that wants to whine about not having an apple to as advanced creating a 12 step quest that will result in that same kid getting an apple after your characters slay an ogre and deliver the apples he drops and making that kid run home and disappear all together, and yes you can do exactly what I just described with some patience and imagination.

The character creator is also quite easy to use, tho a bit limited. You can mostly just pick parts and change colors but there are quite a few parts to pick and choose from and you do have parts for men, women and children, and there is also a randomize option that you can keep hitting until you get something you like, or that is simply off the wall and use that. This for example is the picture of a character I made, his only purpose is to exist in the little game I am making, in fact the helmet he is wearing is only on his head so someone can ask him why he is wearing the helmet.

The map editor is amazing and far more in depth than anything you will find on console and is only matched on PC honestly by other game making software. There are thousands of tiles you can use to make your maps, from water to snow and desert. Trees and ocean,mountains basically just about anything you want, you can have. I even turned a motorcycle into a flying bike because, well reasons I guess, it was there. I simply felt the need to do it. You can design any kind of RPG trope you want from a cave to a tower to a city busting at the seams with activity. Or do what i did, be lazy and put four buildings and pretend they live in the middle of nowhere.

So far I have not scratched the surface of what can be done here. This is very much a how far down this rabbit hole do you want to dive situation. Want to make that old fashioned Dragon quest (Dragon Warrior) you always felt the world deserved, do it. he combat system is built right in. Felt that Final Fantasy VI could have been better? Do it right this time. (the only downfall is that there is no true active time battle system) but you can choose from some premade spells, items, and weapons or go into the system and start from scratch, design each and every item and what it does, each and every spell and how it is cast and its animation and yes, even the match on how damage is calculated. That is all at your disposal. Now you don’t HAVE to do that, you can simply use their stuff but they won’t stop you from messing with it.

Speaking of creating stuff, no RPG is complete without monsters, and yes those are tours to create and manipulate as well. From starting bats and slime to end game dragons. Or mess with your friends and just palate swap the slime until the end of time. Your call guys.

The game however isn’t perfect, mostly because for as great at creating stuff as it is, you have to be patient and sink time into it. You wont make anything truly decent without sinking a ton of hours into this, and YouTube will be your best friend. This isn’t made for people that want to dive in and make a game because that can’t be done. Even tho they managed to simplify making a game by taking the hardest parts out of it, and by that I mean coding and the actual part of designing all of these tiles, you still need to design all the cities and such and the characters. Also on one occasion the game crashed while I was saving and I lost about an hour of work, but seeing as how that was a one time thing that easily could have been on my end so I won’t hold that against it. I am truly looking forward to seeing what other people make. This game from me tho will get a 9/10, with the note that this game is designed for RPG fans that dream of making their own. Everyone else, probably won’t appreciate this game for what it is.. Best wishes and may the gaming gods bring you glory.