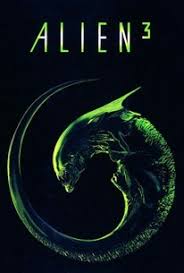 So this is where the ass kissing on the Alien franchise grinds to a halt. If you read my last 2 reviews, you know I worship those films. Honestly, I truly love the whole series- ok, except for Covenant, and trust me, I’m going to talk about that bastard at the end of my alien movie thread- but 3 is where the fans begin to dwindle. David Fincher directed it and hates it with a passion; Alien 3 is known to be one of the most troubled productions in all of cinematic history. I’m going to say the fact it turned out as well as it did is a huge credit to David Fincher’s talent because most directors would have turned it into a laughing stock but he pursued through the bullshit and gave us a fair end to the trilogy- to which I stress that last word: Trilogy. So Alien 3 begins not too long after Aliens ended with Ripley, Newt, Hicks, and Bishop in hypersleep (in Bishop’s case, more like in pieces) on the Sulaco. During hypersleep something goes awry with an electrical fire and somehow, someway two face-huggers found there way on board. Seriously, this makes no damn sense, but sure let’s go with it. There pods are shifted into a EEV and ejected from the ship. It crash lands on the shores of Fiorina “Fury” 161, a all male penal colony. Ripley is the only survivor of the crash- well human survivor. Depending what version you are watching- I’ll get to that- the face-hugger plants itself on either a dog or one of the oxen that haul the EEV out of the water. Ripley awakens, beaten up and hoarse with the colony’s doctor Clemens, who tells her of Newt and Hick’s fate. Hicks was impaled but a support beam inside the EEV and Newt drowned in her sleep; immediately Ripley demands to see Newt’s body. Then demands an autopsy; do I have to tell you why after two movies of chest bursting goodness? The warden and his assistant Aaron interrupt the procedure, informing Ripley how dangerous it is for Ripley to be on her own amongst the killers and rapists and how just because they took up religion doesn’t mean they aren’t any less dangerous. She convinces the Warden, Andrews, to cremate the bodies with some help from Clemens. In a beautiful scene a prisoner named Dillon speaks for them at the cremation, while we see the birth of the dog/runner alien. The murders begin slow but slowly Ripley pieces together what happened to get her there. Paranoid and grieved she forms a relationship with Clemens who she discovers has his own dark past that landed him there; suddenly Ripley watches in utter shock as her worst fear comes true…

but it doesn’t kill her and runs away. The alien kills Andrews in front of everyone and panic sets in. Ripley and Dillon form an uneasy alliance to pull everyone together to trap it, ending disastrously with multiple causalities and the thing still loose. Also, Ripley’s health is deteriorating. She finds the medical scanner in the crashed EEV, revealing the horrible truth, it’s inside her! A queen. Aaron stupidly contacts The Company and immediately they are on the way to retrieve Ripley and the alien. The prisoners make a final stand against the alien but can they kill it before it’s too late?

I cannot stress enough when discussing Alien 3 the fact that besides the theatrical cut, there is the Assembly cut which adds much needed depth, new perspectives, new side plots, and even a different origin point for the alien. It’s pretty damn different and almost a full half longer but I will say I enjoy the assembly cut far more. The acting is really good all around but the special effects with the alien kill me at times. In the scene illustrated above, in that moment, it looks amazing; the seconds leading up to that moment of the alien simply walking up to Ripley looks shitty as hell even by 1992 standards when it was made. It goes back and forth throughout the movie between amazing and shitty. I just have to point this out now- maximum security prison full of killers, thieves, and sex offenders and no guns because you’re on “the honor system”- bullshit dude. It’s nice 3 pulls back from Alien s heavy emphasis on action and horror and tries to go back to Scott’s suspense driven story but c’mon dude, really, not even a handgun in a lock box somewhere. I do like the bleak atmosphere and I have to say I thoroughly enjoy the operatic, Gothic feel of the score. I like how we can an idea how the creature adapts depending on it’s host. And for the best compliment I can ever give this film; the speech before the final climax that Ripley and Dillon give is my favorite pump up speech of all time, seriously. Alien 3 is a good movie and a fair end to the trilogy but not spectacularly great; if I had to rate both versions I’d give Theatrical a C+ and the assembly cut a B+ if that gives you an idea what to expect both versions. If anything should be taken away from Alien 3 it’s that great artists aren’t always the ones who make masterpieces out of gold but can make bronze from bullshit.