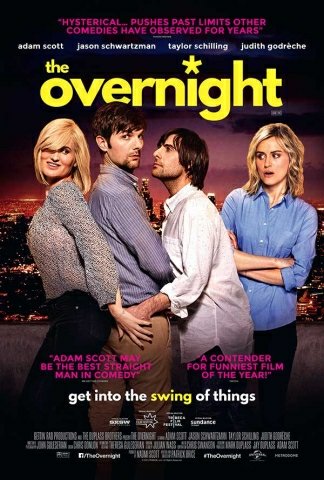 Yea..look I don’t even know where to start on this one. Basically couple A moves from Seattle to California and they meet couple B when they meet at the park when they have their kids at the park. This is basically where the normalcy ends. Hold on people this shits about to get real damn weird.

So we get to couple B’s house for dinner and the kids go to bed. So now they are drinking and discussing work. Guy B sells water filters he invented and chick B is an actress. I thought it was going to be porn but it wasn’t. It was just a demonstration video on how breast pumps work. The logically thing obviously is to give this DVD away to your new friends as a gift…seriously that happens. Now they are smoking some pot, same scene by the way. Now there is some more drinking and dancing and grinding and a game if the floor is lava.

More weird stuff happens and the guys wonder off to see the art work guy B makes…its weird and colorful and its butt holes. No literally. Dude takes pictures of his friends literal assholes and paints colorful pictures of them. I can’t make this up.

Now we all know I hate giving you guys spoilers to the point i rarely give out names. Everything I have told you is in about the first 20 minutes of the movie and isn’t even plot points. Those get even weirder. I won’t discourage you from watching this movie, it isn’t even bad. Its just weird but in a fun way. I don’t regret watching it but it must be noted only certain people will enjoy it. Best wishes and may the gaming gods bring you glory.