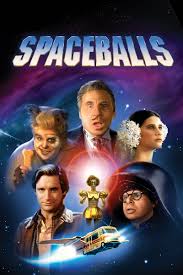 There isn’t much to say about space balls, its a classic Mel Brooks movie. It is goofy, funny, blatantly mocks and parodys another more famous movie while slightly making fun of things in society. You also probably saw it as a kid and didn’t truly understand many of the jokes until you watch it again as an adult. One example that I always remember is when the are combing the desert with actual combs. As a kid I always laugh because obviously this isn’t what they meant. I never picked up on the not so subtle racial joke of the 2 black guys yelling “we ain’t found shit” while using a hair pick instead of the long hair comb you always see white greasers using in the 50’s.

The movie however is amazing, and like always never takes itself serious. It tells the story of Lone Star saving a princess while Lord Helmet and the evil empire tries to use her as ransom to steal air. Yes, air. Anyway any fan of the comedy genre need to see this one, best wishes and may the gaming gods bring you glory.