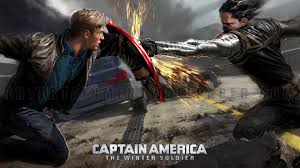 With Infinity War coming to us in a few short months, I thought it would be only fair I cover the MCU as well as I can thus far. For the fourth of July I already talked about Captain America: the First Avenger and Savior covered both Guardians of the Galaxy (2014) films as well as Doctor Strange ( 2016) , so I thought it would be fitting to finish talking about Cap. In this case, I have read the comic too so I got some extra insight on this story.

After the Avengers, Steve Rogers has found a routine in our modern day, working for S.H.I.E.L.D taking down terrorists with Black Widow and being a badass, but it’s not easy being out of your time. He begins discovering quickly how all isn’t right at S.H.I.E.L.D and how a ghost from his past has essentially come in and is trying to kill him after leading to the fall of Nick Fury, a metal armed assassin called the Winter Soldier. It’s up to Captain America to stop this threat along with Falcon and Black Widow and try to bring Hydra out in the open…

Winter Soldier is the definition of a superior sequel. Captain America is much more badass in this film, even from the get go. The fights with him and Winter Soldier are some of the best hand to hand fights I’ve seen in my life. The plot is fairly strong as is the acting and cast. The graphic novel goes into a much greater detail around the backstory of Bucky Barnes during WW2 and his hero/ sidekick relationship with Cap but is still a great read if you like a good spy thriller. Either book or movie, it’s a great story and definitely worth checking out. May the gaming gods bring you glory.