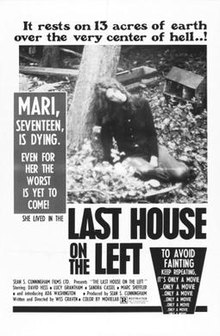 There are  a very few movies that have dropped jaws as well as terrify the masses made by young folks with a passion, as well as a remake that shits all over it. The late horror legend, Wes Craven, as well Sean Cunningham who would give us Friday the 13th gave us a new kind of horror that nearly 50 years, still inspiring writers and filmmakers to this day.

It’s Mari Collingwood’s 17th birthday and all she wants is grab some weed and go to a rock concert with her BFF Phyllis. Her folks, Estelle and John, let her go because kids will be kids, despite the radio reports of a trio of criminals on the loose. Mari and Phyllis find a pot connection in Willow, who leads them to the sinister trio led by his father, Krug, who proceed to kidnap the girls and take them into the woods. They are raped, Phyllis is disemboweled, and Mari is fatally shot, left to die in the water- leading to the twist, the woods are behind the Collingwood’s home. The trio disguises themselves as a family with car trouble, showing up at there doorstep. As the rain descends, Estelle’s intuition tells her something is wrong and tragically, unaware to the criminals, the parents discover the body of their daughter, and suddenly they plan there revenge…

Let’s talk about the original, it’s  one hell of a debut film. The subject matter is indeed disturbing and some of the scenes are hard to watch but it helps illustrate its point. The actors, as well as the way its filmed, do not feel produced or glossy, giving the movie a sense of seldom realism we rarely get in horror anymore. I love the villains, horrible people who go from being dimwitted goofballs to savage fiends which is captured remarkably well. The music is unique to the core and unforgettable. The only real flaw are the cartoonish cops throughout that trip the tone hard at times but I admit, helps gives the movie personality.

Personality is something the 2009 remake lacks. First, why the hell this movie exists, I don’t know. Granted, on it’s own, it isn’t a terrible movie. The cinematography is quite nice at times and the score is fitting. Essentially the plot is the same but with one damning difference, Mari doesn’t die and Willow turns good instead of crack and kill himself which gives it a huge Hollywood feel, if the cinematography and big orchestra score weren’t dead giveaways. On top of that, the actors do look like actors and the criminals look like bad guys from the get go. The fact it does look and feel so much like a big budget movie cripples it and makes it feel like a run of the mill home invasion thriller by the third act.

Last House on the Left was a heavy horror movie with some meaning behind it, made by some 20 somethings who wanted to do something different. The remake ain’t horrid if you never saw the original, but I urge you to if you haven’t. May the gaming gods bring you glory.

2 thoughts on “Last House on the Left”