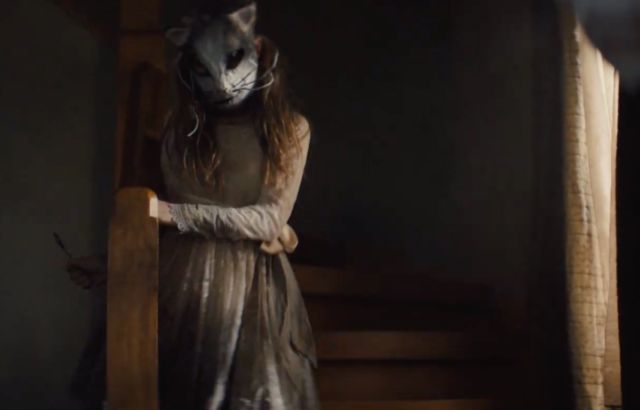 Pet Sematary is what made me a Stephen King fan as a little kid, making me feel uneasy in the fact cemeteries are always a two minute walk away from everywhere I’ve ever lived. The story means a great deal to me so I was a bit irritable when the remake was announced and hinted in the The Dark Tower . But if It (2017) was any indication, I was willing to give it a shot knowing that it sure as hell wasn’t going to be the story I knew. Was I right to be worried?

The Creeds are a normal family who move into a picturesque farm house in the middle of the country. Lewis is a Dr who wants to slow down and spend time with wife Rachael and kids spirited Ellie and baby Gage and Church the cat. While exploring the back woods, Ellie stumbles upon a creepy procession of kids in animal masks going to bury a dead dog in the Pet Sematary, where kids have buried there pets for generations says Judd Crandall, the Creed’s neighbor. Much the like original Lewis is being warned by the ghost of Pascow who he tried to save to avoid the Sematary, or rather what’s behind the dead fall. Some barriers were not meant to be crossed…

I give this remake credit, it does play with your expectations of either the original or the novel and that’s where it’s strongest. It was a huge mistake I believe to ruin the big twist that sets it apart in the trailers; I’m not going to spoil it but I actually really like how it turns out. The performances are really good but the girl that played Ellie I thought was fantastic and I hope to see more of her. The new imagery is cool but somehow feels close to the original. I warn people, do not go in expecting a A to B adaptation but more of a what if type of scenario. A few times the pacing was off throughout all three acts, sometimes dragging but other times feeling a little too fast,  and there is a WTF moment involving a cow I’m sure Savior is going to bring up in his review that made us laugh. while I’ve heard others say there was too much exposition, I feel too much of Judd’s backstory was cut out and the Wendi-go stuff  was mostly irrelevant. Overall, Pet Sematary is a good remake and a good, solid horror movie I recommend to all needing a good scare this spring. May the gaming gods bring you glory and remember…sometimes dead is indeed better.