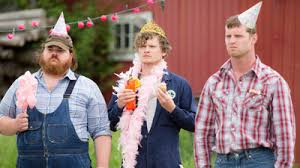 Every so often a friend will recommend I check out a show, this time a friend said dude check out Letterkenny. So he sent me a YouTube video that was basically just a bunch of female hockey players insulting each other. It was kinda funny tho so I hopped on Hulu and watched season one.

I was left wondering what in the fuck I just watched. There is no real overall story, it simply tells you there are 5000 residents of the town of Letterkenny and these are their problems. The majority off the show is just Wayne, who seems to be the main character, fighting people and just stoically walking around.

The odd thing is despite each episode more or less being independent of the others and it largely being based on one liners of Canadian humor, as the show is a Canadian show that takes place in a fictional town in Ontario, it is really enjoyable. The trailers don’t make it look very good, and they don’t really even explain the show, but give it a few episodes before you decide. Best wishes and may the gaming gods bring you glory.

One thought on “Letterkenny Season 1”