First, as always, a HUGE shoutout to the fine folks over at Saber Interactive and Focus Home Interactive for hooking me up with a review copy of this one. I should also note I did buy a copy as well for myself because I wasn’t sure if I would get one, so quite a bit of my game time was also spent in multiplayer with my brother.

I will handle this review a bit differently and break it up into phases, I want to touch first on visual and sound then move on to my single-player time then talk about multiplayer before I talk about issues with the game.

First, the sound and visual. The game is beautiful. It won’t win awards beautiful, but it is beautiful all the same. The trucks getting covered in mud, snow getting tossed around the paint jobs. It all looks great. Even the smoke coming out of some of the trucks looks like smoke would as it gets in your way and then dissipates into the wind. It was truly a joy to just drive around and look.

The sound is also pretty top-notch. Each truck and engine revving and the wenches pulling down trees. And you owe it to yourself to slam your vehicle into a few things just to hear the crunch it makes when you bottom out or slam into a guard rail.

Second the solo play. You will start out with an old beat-up pickup truck. This class is known in-game as a scout and truthfully this truck is awful. Even doing the tutorial with this thing can be frustrating if you don’t pay attention to what the game says about how to use the wench. The game directs you how to use that, explains pretty much why this truck is horrible and gets you into a bigger truck so you can fix a bridge and move on to your garage. The game will then teach you how to switch zones and such.

From there much of the game is up to you. Do you want to drive around and unlock towers to see more of the map and get some of those hidden upgrades? Do it. Want to do side missions and fix up bridges that’s an option. You can also just do the main contracts and watch the world change. I wouldn’t recommend doing that tho, much of the game is about building your fleet up and upgrading it which requires experience and money.

Third, the multiplayer.  The multiplayer is honestly where this game shines and I truly think it is made to be played. Don’t get me wrong, you can 100% absolutely play it alone and do everything the game has to offer. But the multiplayer just felt special to me. To be perfectly clear, the game itself does not change. You will do all the same missions drive all the same trucks and everything. In fact, you will load into someone else’s game (or them into yours) with all their progress and help them make more. You get money and experience for doing so, then you just go back to your own game sadly with none of the progress. (you will keep money and experience)

I know I said it felt special and that sounds pretty bad doesn’t it? I agree. That does admittedly suck. However, there is a certain joy to seeing someone finish a job they otherwise wouldn’t have because you helped out. When you see a friend take a turn a little to close and tip on their side so you use your wench to right them. Even better is when they can’t quite get a truck unstuck but you manage to be just that little extra help they needed to get that new vehicle they needed. Yes, it is the same game in both but admittedly the multiplayer just makes the whole game feel amazing to play.

Now for the downsides, of which there are more than a couple. First, the starting vehicles are pretty bad. There is a DLC scout truck and heavy truck that are essentially game breakingly overpowered. For less than $7 you can basically drive anywhere you want in the first area of the map. The balance there is just non-existent and I wanted to quit using the starter vehicles until I got some of the upgrades. My brother spent the cash on the paid vehicles the day he got it and had a HUGE advantage. I would actually suggest buying them if you have the means, they make the game more fun.

Another downside, the game crashed a couple times on me and my brother in multiplayer when we switched areas, and those DLC vehicles I mentioned, he lost one. We have no clue where it went. We checked the garage and the area we loaded from and into, but we just can’t find it. Now I should say crashes are rare, as in the two that lost his vehicles are the only two we ran into. But they did lose him some stuff.

My last real thing to point out is this is absolutely a simulation game and it plays like one. It is slow and you will need to put time and effort into it. You don’t need to be a car person and the game will teach you everything you need to know, but you will need to use it. This game isn’t for people that want to just drive everywhere as fast as possible. You will be switching gears and outfitting the right tires and such. This isn’t bad, it just needs to be known by people.

Now should you buy this game? In short maybe. Did you like MudRunner? If you did it’s a must buy. Are you a fan of the Farming Simulator series? You will probably like this one, its why I was interested in it. The game is a bit rough in areas but the game will be supported down the line just like the rest of their games and while there are bugs here and there I have no doubt they will be fixed. Like any game of the genre, it isn’t for everyone, but my brother that hates the genre hasn’t out the game down which says a lot to me. I will give it a 7/10 because of the lost vehicles in the crash, but it would be higher without that. Best wishes and may the gaming gods bring you glory. 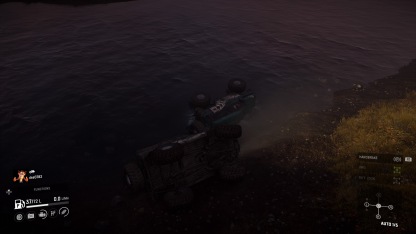 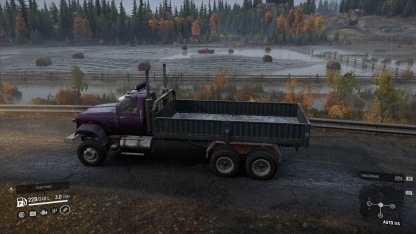