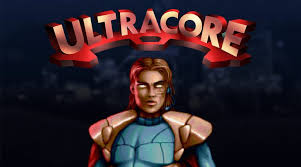 As always, I want to give a huge shout out to the guys over at ININ games for tossing me a review code to this one. This game was set to release back in the 1990s but never saw the light of day. However thanks to some collaboration with the original team, we now get to see this beautiful game on the PS4 and Nintendo Switch 9 (and soon the Vita)

Ultracore is a simple game to describe. It is a Metroidvania style fast-paced action-filled bullet flying adventure. Of course, there is a story, and as always I’m not going to discuss it. You guys can go ahead and discover it for yourself. It has been a long time since I have simply played a game where all I needed to do was simply jump around kill enemies and, well let’s just say it, I more or less felt like I was playing Contra again.

The soundtrack was also excellent as well, it has that old school feel to it but with a new sound to it.

The game is simple to describe I will admit, but that doesn’t make the game itself easy. The usual challenges for this style of game are still there. There will be jumps that will test your skill and timing, enemies that you will need to know the pattern of.

There are also various weapons upgrades to use as you would expect from such a game.

The game isn’t perfect of course, it is a bit short and the controls are were a bit stiff for my taste. That being said, for fans of retro games and this style of game, this one is worth checking out. At 22.99 it felt like a fair price to me, I give it a 7/10. Best wishes and may the gaming gods bring you glory.

One thought on “Ultracore Review (PS4)”