It is that time again to give out thanks to those that have given me things to play and share with you guys. This time it is 704Games and Motorsport Games. it has honestly been years since I played a NASCAR game, I am talking early PS3 ( actually it was Xbox 360 I think) and my brother and I would play it for hours. We mostly didn’t play it properly, we always liked to make other people crash. For you guys tho, I broke tradition and did things right. Mostly.

First thing first, the graphics. I play on a PS4 Pro and a 4k TV. You guys all know while I take my PC gaming slightly more seriously than I do my career as an astronaut that I don’t have, my console set up is top of the line. I did not expect this game to be one of the better-looking games I have played recently, but it absolutely is. 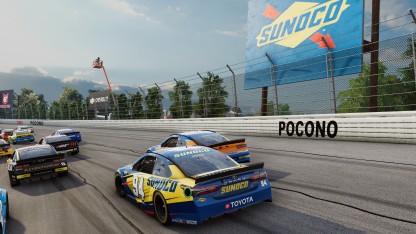 The sound is also great, this game includes all the cars and trucks from NASCAR cup series, NASCAR Xfinity series, and NASCAR Gander RV and Truck series, and they sound like they should sound. Racing around the Pocono Raceway SOUNDS like you are at the Pocono 500. I may not be a fan of racing but considering it is less than an hour from my home, I have been to it a couple times. Numerous friends and families go every year and have dragged me there. Plus, free beer.

As with all games tho, the gameplay is what is important. From the standpoint of someone that has not played a NASCAR game in probably a decade, this feels like the definitive version of NASCAR. It has everything I could possibly want, great handling amazing customization for the cars and trucks, the controls and visuals are just downright beautiful. Also, the career mode is all I want from a career mode. I start at the bottom, race for a company, and choose if I want to start my own team or not.

This is where the “but” comes in. As someone that doesn’t really care for racing games, the cliche still holds true. Eventually, I felt like all I was doing was making left turns all day. The finer points of racing were lost on me. I understand them, I know what drafting is and how it works and why you need to do it at the higher difficulty levels to win (tho you can just turn the yellow flags and damage off and just spin cars out until you win if you play on easy) Buying this game is like buying any sports game, unless you are a die-hard fan, I can’t really justify buying it every single year at launch. If you don’t have one tho or haven’t bought one recently, now is a good time to upgrade. I have seen this one get some pretty low scores because it is “Just like last year” or “all you do is turn left” but I won’t just it for those things. I will only just it for what it is, and what it is to me, was a fun experience that was made for race fans, and for them, it is an 8/10. Best wishes and may the gaming gods bring you glory.