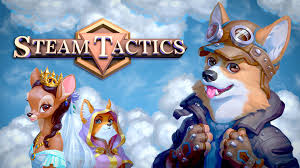 As always when I do these things, a huge shout out to the guys and gals at Sometimes You for tossing me a review copy of this one.

Now as for the game itself, in a nutshell, the king is sick, you lead a group of airship pilots on a quest to save him at the orders of the queen and on the way a whole lot of people will be trying to stop you. I put that in a nutshell because I don’t like to ruin things for the readers. The important part here is the combat, which I will get to later. First I want to get to the visual and the sound.

Graphically the art style is great, I love watching the planes go through the motions and fly around and see the missiles fly through the air and explode. It is a great throwback to the more simplistic time when a game being fun mattered more than anything else. That isn’t to say they aren’t quality, because they are. For the type of game it is and the cost of it ($9.99) the value and quality are top-notch.

The sound falls into the same category of obviously not winning any awards when compared to AAA titles, but it isn’t meant to be. It serves its purpose very well, the explosions and planes sound fantastic and will suck you into what is going on. I even found myself enjoying the music during the battle at times.

All of this would mean nothing if the combat wasn’t good. After all, this is a turned based tactics game. Many of tactics games have been spoiled by terrible combat even tho they had great stories, or they had no customization at all.

You will be happy to know the customization here is close to being absolute in terms of who can equip what items. You can basically make any character into whatever you want, give one all the canons, turn one into a flame-throwing nightmare, do the smart thing, and balance people out. The choice is yours. You can even combine weapons that are the same to make them stronger.

The combat itself is simplistic, but I don’t mean that as an insult. There is nothing going on in the background and everything is upfront. If something is going to contribute to your attack or defense, it is there in the menus for you to go to and see. That doesn’t mean the combat is easy to master tho. If you make a mistake you can find yourself surrounded by enemy ships getting hammered or in a position where you can’t shoot at ships that can easily hit you since not every weapon fires the same distance or in the same direction.

Once I found myself trapped in a corner with two ships equipped with flame throwers unable to hit them since my cannon could only hit two spaces away. I won the battle, but I did lose that ship because I was careless.

The game is fun and I appreciate how simple it is to dive into and play and at its price point, I have no choice but to recommend this one.  Is it the best game in the genre? No, absolutely not. And people looking for a true challenge in that “Dark Souls” way also won’t be satisfied. But the story is fun, the customization and combat are easy to get into and are satisfying. For me, it was an 8/10. Best wishes and may the gaming gods bring you glory.