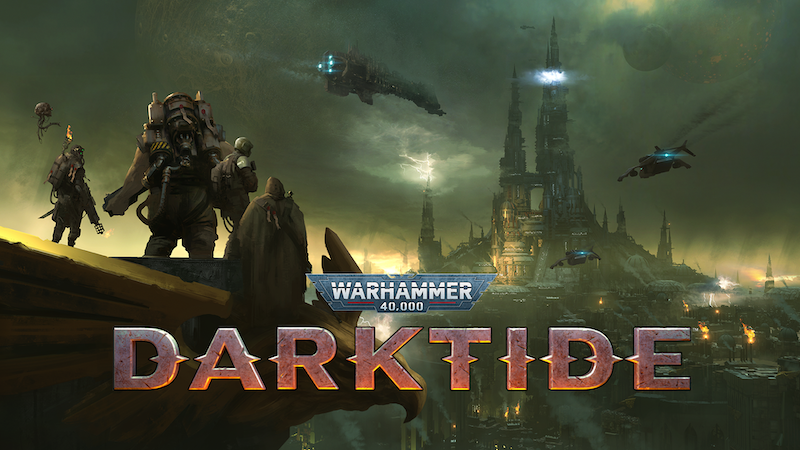 Warhammer 40,000: Darktide
Fatshark brings the four player CO-OP experience to the 41st Millennium in 2021. Go deep into the hive city and face hordes of enemies you have only seen in your nightmares. Players will not be able to hide behind lethal ranged weapons, they’ll need to combine both FPS and melee skills as they get up close and personal in visceral clashes between Imperium and Chaos factions. Warhammer 40,000: Darktide will bring everything you have come to expect from the developers of the multimillion selling award-winning Warhammer: Vermintide franchise.

“I am happy to announce Warhammer 40,000: Darktide to the gaming world today. We are utilizing the knowledge and experience honed from the Vermintide franchise in this new take on the 40,000 universe.” says Martin Wahlund, CEO Fatshark. “We are bringing the four player CO-OP experience to a new setting, and we can’t wait to share the game with everybody in 2021.”

Get Updates on all things Warhammer 40,000: Darktide
www.playdarktide.com

The previously announced release date for Umihara Kawase BaZooKa! from ININ  Games for both the physical and digital release – Nintendo Switch and PlayStation 4 –  has been officially reset to September 29th 2020.

This delay will allow players to benefit from an improved worldwide multiplayer infrastructure, ensuring fast and stable online fights. ININ Games also took the time to add languages, to provide for a great game experience.

All editions will be localized into English, French, German and Spanish. The game will be available in Europe, America and Australia.

Enjoy the trailer, and may the gaming gods bring you glory. 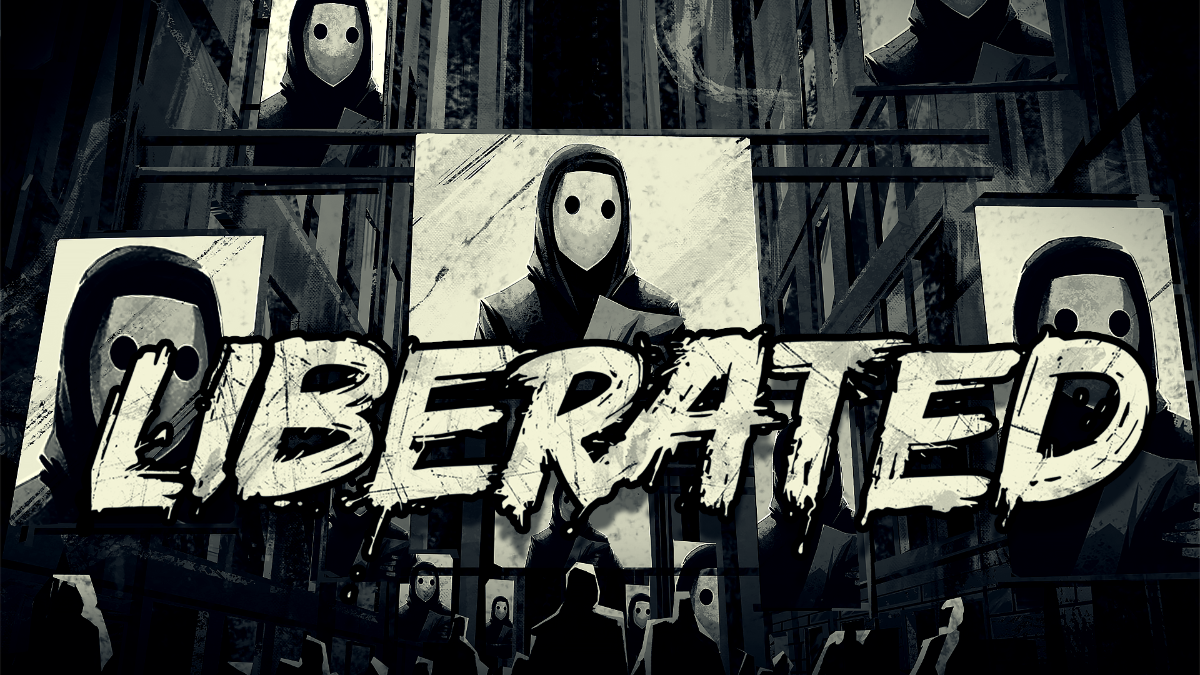 A free sneak peek version for LIBERATED, an upcoming action-adventure game, is now available for a limited time, on Steam and GOG.com. This stunning title by Atomic Wolf and L.INC, taking place inside a living, hand-drawn comic book, will premiere for PC on July 30th, 2020.

LIBERATED is a gorgeous hand-drawn action-adventure comic book game about a revolution in a cyberpunk world. The player joins the group of activists who fight to uncover the truth about the oppressive government.

First released on Nintendo Switch, the game will come to PC with visual improvements as well as 2 free DLC chapters and full English voice-overs done by the award-winning localization agency, Roboto Global.

Try it for free for a Limited Time

The Sneak Peek, available until July 27th 19:00 CET / 10:00 PDT, on GOG.com and Steam, shows a dramatic tipping point in the story and lets the players try the action-driven gameplay. The free trial shows the abridged third chapter of the story, with many scenes omitted to avoid major spoilers.

This is a work-in-progress free sample of the upcoming game. There may be differences between the Sneak Peek and the final product.

An Acclaimed New Take on Cyberpunk
Liberated has struck a chord with the core Nintendo audience. Rewarded with a score of 8/10 by Nintendo Life, 9/10 by Pure Nintendo, and 8/10 by NintendoSoup, Liberated was praised for its unique hand-drawn visuals, a relevant and universal message, and its full and unparalleled commitment to the comic book narrative.

For those that missed my Ultracore Review (PS4) you can now buy it for the PS Vita as well. I know it isn’t the most popular system out there, but for many, they still love to game on the go and for those that enjoy this genre, it may be worth checking out. Best wishes and may the gaming gods bring you glory. 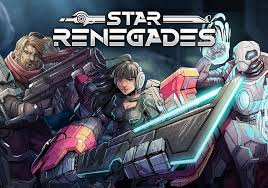 Rebellion has waged for generations to stop the Imperium’s control of the galaxy — now it’s up to you to lead the way. Star Renegades, the tactical rogue-like RPG from Massive Damage Games (Halcyon 6: Starbase Commander) and Raw Fury, is coming to PC via Steam and GOG.com on Sept. 8, 2020, for $24.99. The game is expected to come to Playstation®4, Nintendo Switch and Xbox One later this year.

Star Renegades fuses a reactive, turn-based battle system with a procedurally generated campaign to ensure that every playthrough is unique and challenging. Lead a ragtag squad of rebels through richly detailed sci-fi landscapes, ruins and more on a mission to overthrow the overwhelming might of the Imperium. Your enemies are more than just trash to farm — they’re unique adversaries that evolve after each fight and move up the ranks as you play, forcing you to develop new strategies to survive.

Saber Interactive and Focus Home Interactive have announced that the “Dronemaster” update is available to download for free today in World War Z, the best-selling co-op shooter inspired by Paramount Pictures’ blockbuster film. This latest update introduces full* PvE crossplay support across PlayStation®4, Xbox One and PC via the Epic Games Store, letting you party up in co-op with friends no matter what platform they’re on.

World War Z has also released its first new playable class since it launched last year: the Dronemaster. This highly versatile character comes with its own personal drone which stuns zombies when they get too close for comfort. You can customize your drone in the perk tree to suit your play style and squad comp: increase its offensive capabilities to make it more lethal in an assault, or raise its defensive powers to better support your team.

In addition, today’s update features a new rare weapon pick-up with its own upgrade tree for your armory: the ACW-20. This low-caliber, semi-automatic grenade launcher is perfect for mopping up tightly packed groups, but watch out for friendly fire! There’s also a variety of new weapon upgrades, perk rebalancing, fixes and quality-of-life improvements.

Finally, players can grab World War Z’s latest premium DLC today: the “Signature Weapons Pack,” which includes four unique weapon skins for the game’s main characters. This DLC is free for Season Pass and GOTY Edition owners. It is also available for standalone purchase on PlayStation®4 and Xbox One.

Powered by Saber’s dynamic Swarm Engine™, World War Z delivers a thrilling social play experience from the comfort of your home. Survive against hundreds of fast-moving, bloodthirsty zombies at a time with six distinct classes and an arsenal of deadly weapons, explosives, turrets and traps. Outlive the dead through intense four-player co-op campaign missions around the world, and battle both zombies and real human opponents in competitive, team-based Players vs. Players vs. Zombies (PvPvZ) multiplayer.

Paradox Interactive, a publisher and developer of games worth acquiring, today announced the acquisition of Iceflake Studios, a developer located in Tampere, Finland. This brings the total number of studios owned and operated by Paradox Interactive to nine, with locations in six countries.

Iceflake Studios was founded in 2007 and has developed games for PCs, consoles and for all current VR and mobile platforms. The studio is currently developing Surviving the Aftermath with Paradox, a survival management-strategy game now available in early access on PC and Xbox.

“When we started our discussion with Paradox, we knew that we had a very like-minded approach. Our collaboration with Surviving the Aftermath has been excellent and showed how similar our approach to development is. So when Paradox suggested that we could become part of the family, we were thrilled,” said Lasse Liljedahl, Co-Founder and Studio Manager at Iceflake. “It did not hurt that we were fans of Paradox games ourselves, to begin with! This new step helps us to focus on our dream of becoming one of the best developers in the game genres we love so much.”

“The collaborative efforts we’ve shared thus far with Iceflake have given us all the confidence that this is a natural fit,” said Charlotta Nilsson, COO at Paradox Interactive. “Surviving the Aftermath fits the Paradox portfolio perfectly, and Iceflake has shown themselves to be the kind of partner who can help us create more titles in our core genres. Turning this relationship into a long-term partnership is an easy decision, and we’re eager to share more great games with our audience in the years to come.” 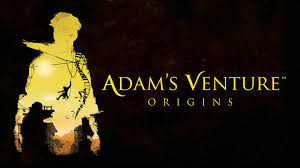 Adam’s Venture Origins released on May 29th from publisher Soedesco.  The game takes place in the 1920’s and you play as Adam Venture and will attempt to unravel the secret of Eden. There will be puzzles to solve and ancient ruins to explore. I personally have not played the game myself, but the story sounds quite interesting, and as you can see from the launch trailer above the game does a nice job capturing the feel of being in an underground temple. I have listed a few of the games features below, best wishes, and may the gaming gods bring you glory.

So this one is farming, with a twist. Not only will you be farming and trying to impress the ladies in town and trying to feed humanity to make tons of money, but you will also be fighting outrageous creatures in an attempt to keep yourself and those crops safe. This is one I haven’t gotten to play yet but have had my eye on for a bit. Enjoy the trailer, and may the gaming gods bring you glory.

The Death of Autonomy: The National Security Law

As always, just sharing a well written post from a friend over in Hong Kong in hopes we can all understand what is happening there a little better.