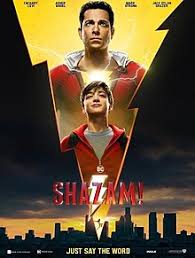 Haven’t we all wanted to be superheroes at one time or another? What if you could just utter a word and instantly with a streak of magic lightning be turned into the ultimate you? Super strong, fast, bulletproof, able to fly and control electricity are just some of the gifts bestowed on Billy Batson after crying out the name Shazam…

Billy Batson is a troubled youth, after losing his mom as a toddler he’s spent the better part of his life searching for her while doing everything in his power to ditch foster care. After so many families, Billy’s last chance is in a group home headed by two good people. After kicking the asses of some bullies picking on Freddie, his disabled, superhero obsessed foster brother, Billy’s life is changed on the subway when he’s taken to a dying wizard who passes on his powers to Billy, hoping he’ll stop a angry, demonic infused Thad Sivana who has unleashed the evils of the 7 deadly sins after being rejected to adopt the powers of Shazam as a kid. It’s all fun and games for Billy, using his newfound powers and body to live out most kids fantasies, but will he make the right choices when the time comes and become a real hero?

Unlike the dark as hell Batman Vs Superman or edgy wannabe Suicide Squad , the DCEU has turned over a new leaf starting with Wonder Woman and Aquaman . Shazam is a lot of fun but I have to say I prefer WW and Aquaman more. There is a surprising amount of heart in this movie and a lot of scenes that tug at your heart strings. All of the kids and family are great but Zachary Levi as Shazam steals the show, he’s funny as hell, energetic, and fun as the grown hero. While Mark Strong, always a great villain, is good here I couldn’t help feeling his character could’ve been made more compelling instead of cartoon like bad guy ( not to mention I wish he could have continued playing Sinestro in a Green Lantern sequel) I do have to say the pacing is off a few times and the movie does drag here and there but the end is way longer than it has to be. Another issue I have is the CGI on the sins isn’t great and kinda took me out of what could have been some great scenes. In the end, Shazam isn’t perfect but it’s a good time I’d say worth checking out. May the gaming gods bring you glory.