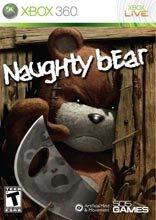 Dude, when I first heard about this game in Fangoria magazine (man that seriously brings me back) my brain truly had no idea how to comprehend this game. Essentially what we have is a Grindhouse- exploitation revenge tale in a kid’s program. Naughty Bear is a outcast on a island of happy, friendly Teddy Bears. One day, he snaps when one of the most popular bears doesn’t invite him to a birthday party and the madness ensues. Naughty goes on a violent stuffing filled rampage, facing off against the police, military and even freaking ninjas as he gets his revenge.

The opening level, in a rare feat, actually shocked me. Naughty has a huge range of possibilities to kill the other bears, whether you are going to traditionally melee or blast your enemies away or take more creative, sadistic measures like drowning them in a toilet, burning them alive in a campfire, or bashing there heads in off a DJ mix table. The aesthetic and music pretty legitimately feel like a children’s TV show, including a really creepy, sinister narrator that sounds way too cheery to be telling the story of a teddy bear who went postal. Despite the insane premise and horrific possibilities, the gameplay sadly rather sucks. Everything feels clunky and the levels feel repetitive and small. The base game is really short, so I seriously recommend if you try it, to get your hands on the special edition with the bonus levels to extend the length but even then it’s a short ass game. I recommend checking it out if you play a truly batshit game, but I don’t think it’ll make any top 10 lists. May the gaming gods bring you glory.