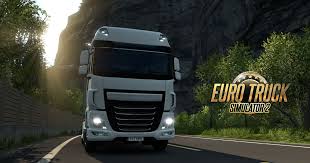 This game in theory, is dumb as hell. Hey let’s make you drive a truck, following actual European traffic laws, while delivering goods, for no other reason than to buy better stuff than to do it again. Seriously, tell me in theory this game shouldn’t be garbage.  However, the game is actually quite fun and amazing. I don’t know how or why. But it is. The game is exactly what I described, and it isn’t even graphically amazing. It is simply relaxing to just drive your truck around.

Here are some issues tho I had with it. I have never been to Europe. So I don’t really understand their traffic laws. That being said, I am 100% positive no cop on earth is going to nail me only for speeding while I am driving down the wrong side of the highway. Not to mention some times my trailer would hit shit and get stuck on stuff that doesn’t seem to exist at all.

The game tho is weirdly fun and is aside from backing up a damn trailer is quite simplistic, but is just fun and relaxing, and I do appreciate the ability to stick music into the sound folder and play music on the radio. Best wishes and may the gaming gods bring you glory.