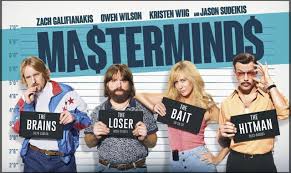 Masterminds starring Zach Galifinakis and Kristin Wiig is the story of a robbery gone right believe it or not. A cool $17 million and a trip to Mexico. The problem is after David (Zach) is sent to Mexico before meeting up with Kelly (Kristin) whom has no intention of going there he is betrayed by Steve (Owen Wilson) and the feds are now after him.

Things get worse for David when Steve sends an assassin, Mike (Jason Sudeikis). Luckily for him the fake name they used for Dave happens to be Mike McKinney. Yes they used the assassins name and life as his alias. In a weird twist tho they become friends.

The movie itself is pretty solid but isn’t great. The most interesting thing about it tho, is it is actually based on a true story and to this day around $2 million dollars of the $17 million in the Loomis Fargo  Bank heist is still missing. Feel free to check this one out, if only just for the story. Best wishes and may the gaming gods bring you glory.