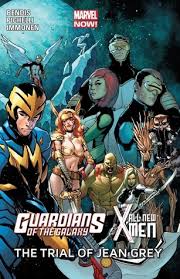 So, before we begin, let me pose a question that has been asked in fiction and is what got me to read this book: how far should you go to prosecute someone for something they haven’t committed yet? I love the All New X Men series, where the original 5 X Men go forward in time to stop a radical mutant movement while having to come to terms with there futures, whether it’s Iceman coming to terms with his sexuality, Beast discovering he’ll lose much of his physical humanity and it will eventually be his end, or in this case, Jean Grey finding out she will be the death of millions as the Dark Phoenix.

A console of planetary figureheads led by J-son of Spartax ( Star-lord’s real father; Guardians of the Galaxy Vol. 2 (2017) changed that hard). Earth has been put under a sort of quarantine because of the damage done to the universe as well as the amount of super-powered people there. The Guardians of the Galaxy have fought back and forth against this. The problem is, word gets out Grey is alive and well on Earth. This news sparks outrage amongst the others, especially Earth’s former ally Gladiator of the Shi’ar Empire who takes it upon himself, against everyone else’s wishes to have her captured and brought to trial and punished. A crew of mercs attack the X men and manage to capture her; the Guardians investigate thinking it was part of a plot from J-son Quill, showing up soon after Grey was captured. The X men and Guardians decide to free her, but it’s the Guardian’s allies, the Star-Jammers that wrecks Cyclops’s world- meeting his long lost father in space. Can the Guardians of the Galaxy and X men free Jean Grey and bring down a alien empire?

I had a lot of fun with this story and it’s a quick read. My favorite aspect was the interactions between the two teams, like Angel and Iceman being terrified of Groot or a quiet exchange between X-23 and Drax. The character roster and art work is pretty good and may I say the variant covers, which feature a member from each team paired together which are pretty epic. Good news for those who aren’t familiar with either series or it’s characters, there is a character sheet and two detailed synopses that bring you up to speed. The only drawback I have is there isn’t as much action as I would have liked to have seen and while it doesn’t make much sense, I would have loved a quick fight between the two. In the the end as I stated in my post 5 Marvel stories that hooked me and I’d say it’s worth checking out. May the gaming gods bring you glory.

3 thoughts on “Guardians of the Galaxy/ All New X Men: The Trial of Jean Grey”