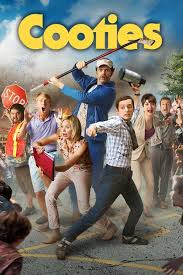 Cooties is a 2014 horror-comedy about a school and some teachers that have to deal with Cooties, which are basically zombies. Sort of. You see this started with some chicken nuggets that made a little girl sick. She, in turn, bit another kid who bit another. This keeps going until everyone has cooties. Why is it called cooties? Well, it only turns people that haven’t hit puberty yet.

The movie is actually pretty funny to me, but admittedly many people won’t like it for one very big reason. All the zombies are kids, which means all the adults are beating kids to death. You will later discover in the movie it is a worldwide thing since of course, it is a huge chicken nugget factory.

None of this bothered me of course since it is just a movie and a comedy, and the love story in there wasn’t front and center but just kind of tacked on in a fun way. This is pretty much a B movie with some real celebrities in it which I am ok with it. Go check this one out on Hulu, but just know it isn’t a great movie it is just silly and tasteless. Best wishes and may the gaming gods bring you glory.