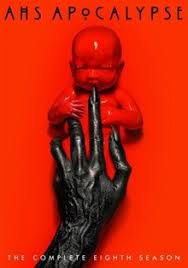 We have a penchant for dark humor here at Saviorgaming and while being cooped up at home during the Corona Pandemic, I figured it’s as good as time as any to catch up on my American Horror Story, and of course I left off on Apocalypse, the 8th season. While the show has been pretty divisive over the years, pretty much everyone I talked to hates this season; how can a horror show botch the end of days?

The day has come and the world has ended in nuclear hellfire as many have predicted. A secret collective of the world’s wealth, brains, and most influential known as the Cooperative have gathered people deemed genetically suitable of repopulating the world at a series of outposts. Outpost 3 is strict and divided between the elite and the workers. A emissary of the Cooperative arrives through the wastes to evaluate the outpost for a sure chance at life; this emissary, Michael Langdon, is not what he appears to be. When the familiar witches of American Horror Story: Coven arrive, we learn the nature of Michael as the Antichrist, but can these powerful ladies stop the devil?

Well, first and foremost I’m going to answer the question I left off with: yes, I would say Apocalypse is the worst AHS. What kills this season is mostly the narrative and how it’s structured. Acting as the Glass of the series, it’s a follow up and sequel season to both Coven and the original American Horror Story that is messily put together for the most part; most of the season is one long backtrack while the opening episodes feel like a edgy YA dystopian knockoff. The show gets better as it goes but it does feel too little, too late by the end. Another thing I have to add is the effects are really crappy and fake at some points and what we get of the wastelands isn’t at all impressive. And the final thing that bugged me was how the same actors were playing so many roles at the same time; Sarah Paulson plays  4 different characters in this season alone. Despite the negatives, it was nice to see the witches from Coven reunite and the music is really solid. Honestly, if you are a die hard fan I’d recommend skipping this season unless you want a meh story and some unintentional laughs. Be safe and may the gaming gods bring you glory.