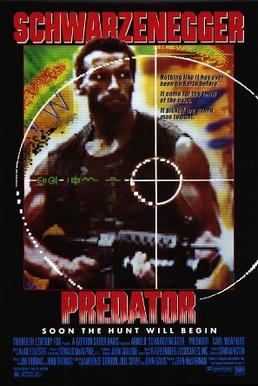 There was no time for action and sci-fi movies in the 80’s whether it was Aliens , Robocop , or Terminator the scene was at it’s peak. You can argue which is the best and for me its a close ass tie between Aliens and the original Predator.

Dutch Schaffer is the head of a crew of a special ops rescue team getting reassembled and sent into the jungles of Central America on a mission. Bullets and badassery are on the agenda and delivered as they guerrilla soldiers they came to wipe out have gotten seemingly violent as Dutch and his team find a couple of skinned bodies hanging from trees. The hostages talk of a demon in the trees. Everything seems said and done but members of Dutch’s team are getting picked off one by one by an unseen assailant with some badass tech. Can Dutch and his team survive the mission and face something inhuman?

Predator is a fantastic movie and should be seen by all- yes that’s a short review. You have memorable characters, score, kills, and plenty of badass quotes. The Predator is a Sci-fi action icon and is a great monster. The final battle between Dutch and Predator is one of my all time favorites and the Predator’s dying laugh is truly haunting. The action scenes are powerful and there is plenty of suspense once the Predator enters the scene. In the end, this is an outstanding 80’s action movie I can’t recommend more. May the gaming gods bring you glory.

P.S: R.I.P Little Richard, who’s voice inspired countless artist and set the scene for this badass movie. You will be missed.

One thought on “Predator”