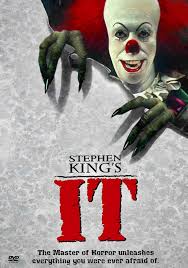 The 1990 version of It has been a classic since, well since 1990. When the remake was announced people kind of lost their minds. Who could possibly play Pennywise better than Tim Curry? Well this isn’t about all that, but if you are interested we did cover that you can read more here.

Watching this movie made me remember that this wasn’t truly a movie, but a made for t.v. series. This does show by the lack of swearing and blood, something the 80’s and 90’s usually didn’t shy away from. This being made for t.v. tho, they did have to find a way to tone down what is actually a pretty violent and disturbing book. This is where they succeeded quite well.

In fact this may actually be the most successful part of the whole thing. When I was younger this movie actually was pretty freaky, but as an adult there were things that actually annoyed me more than anything. For example the constant jumping back and forth between childhood and being an adult as they introduced characters seemed completely unnecessary. It was also a 3 hour series that easily could have been two hours with much of it being feeling stretched out for no reason I can think of.

That isn’t to say the whole thing is bad, each character is played magnificently and Tim Curry still plays an amazing Pennywise the clown. I also feel comparing the two may be a bit unfair seeing as how one is made for t.v. and the other is a full-fledged movie.

At the end of the day however I have to admit, the 1990 version of It just doesn’t hold up very well for me. It’s still solid enough but it just doesn’t compare to the remake for me which I would much rather watch. Best wishes, and may the gaming gods bring you glory.