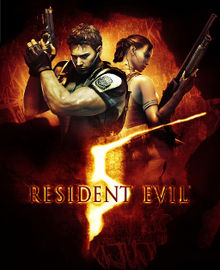 After the huge impact Resident Evil 4 had on me, as well as 2 and 3, I was pumped for 5 and was a huge selling point for me getting a PS3. Was it worth the hype?

Years after Resident Evil (remake) , Chris Redfield ( now a hell of a lot more buff and rugged looking.) is a agent of the BSAA, an organization tasked with eliminating bio-terrorism across the globe. On the ass hunting down a scumbag named Irving, Chris ventures to Africa, partnering with Sheva as they discover a hideous affliction of a contagion called the Uroboros as well as the Las Plagus. After Irving, the pair discover secrets leading them back to the ghostly remnants of Umbrella, discovering where the progenitor virus came from as well as the long awaited reunion with Chris’s old teammate and nemesis Albert Wesker as well as another ghost from Chris and Wesker’s past. Can the duo defeat the OP Wesker and stop the Uroboros?

While not terrible, this game has much to be desired. Graphically it’s beautiful, accompanied by a great score, perhaps my favorite of the series in fact. Gameplay is solid but the scare inventory slots can be annoying. A big this I have to say is the creatures in this game are the least frightening in the whole series. In fact, I have to say the Majini later on made me laugh rather than fill me with fear. You can definitely tell this game was a third person shooter at heart, which did function and play well enough as one, unlike Resident Evil 6 but damn it doesn’t feel right. Another huge issue I had was that the A.I for Sheva was dumber than a bag of rocks.   Plenty of times her idiotic death resulted in a pain in the ass redo or if I gave her a gun, she would waste the bullets, bullets I sorely needed. I do like that every loading screen is a summary from a Resident Evil timeline you can access in the bonus menu to learn more about the lore or get a better perspective on the lore. The best way to enjoy the game is with a buddy, which by the way, as Savoir and I proved, the game has drop in/ drop out couch co-op as well as online co-op; the game becomes 100 times better with a friend. If you and a buddy want a good game to play, it’s definitely worth the $20 it goes for. On it’s own its a solid game with some issues that can be overlooked. May the gaming gods bring you glory.

One thought on “Resident Evil 5”